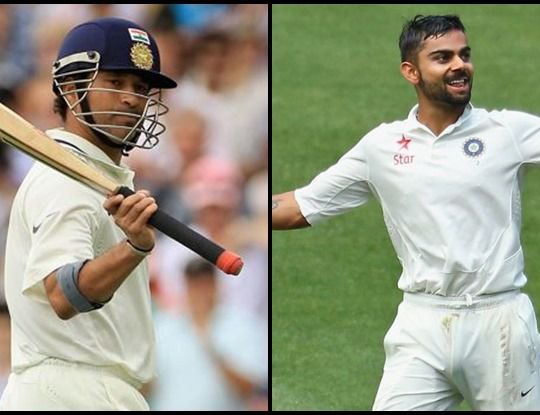 The India captain recently surpassed Stee Smith to climb to the number one spot in the latest ICC Test Rankings. He is the first Indian since Sachin Tendulkar to attain this feat. Kohli is also the No 1 ODI batsman. However, at 934 points, he is India’s highest-ranked batsman. Kohli is 14th overall, on the all-time tally of points.

At the start, we want to clarify that stats are not the ultimate parameter when it comes to assessing greatness, but it surely gives you something to gauge. Former Indian maestro Sachin Tendulkar and current Indian captain Virat Kohli, are both great in their space and time. So, how do we asses?

Virat Kohli has played 67 Tests, so let us find out where the two stand after that many amounts of Test matches. Sachin went on to play 200 Tests before calling it a day. When Sachin played his 67th Test, he was a youngster, even less than what Virat is today, as he was an early starter.

This clearly shows Kohli is ahead of his predecessor easily, in terms of runs scored, centuries made and highest score.

But is that enough to decide who is better, considering Sachin played at the top of the game for 24 years, that takes a lot of discipline to be at the top? Kohli is 30 and still has time in cricket. But with Kohli the big question would be, will he last the distance, injury-free, with a jam-packed BCCI schedule?

Also, in six out of 67 Tests, Virat Kohli has been India’s top-scorer in both the innings (incl. incomplete innings). Sachin Tendulkar also had six such instances in his career of 200 Tests. Clearly, India is more dependent on Kohli now than they used to be on Tendulkar.