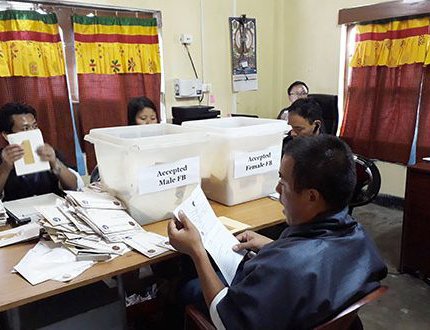 Voters in Bhutan went to the polls Saturday in the first round of only the third election in the small Himalayan nation wedged between rivals India and China. The two parties with the most votes will contest a run-off on October 18, with Harvard-educated Tshering Tobgay, 52, hoping for a second consecutive term as prime minister.

The two parties that have made it through the National Assembly Election primary round are Druk Nyamrup Tshogpa (DNT) and Druk Phuensum Thosgpa (DPT), after polls ended today.

DNT secured 92,722 votes and DPT secured 90,020 votes, making them eligible for the general round which will be held on Oct 18.

DNT President Dr Lotay Tshering told BBS that "elections are unpredictable and is happy that DNT, a party from outside the parliament, has been elected."

"DNT is happy that the people of Bhutan believed in the party's vision of narrowing the gap and bringing healthcare services to the doorstep," said Dr Lotay Tshering.

PDP President Tshering Tobgay congratulated the presidents of DNT and DPT for their "outstanding performance". He also congratulated BKP for "taking part in this important election".

The general round will be held on Oct 18. It will be the country’s third general election.

But the keen mountain-biker’s People’s Democratic Party (PDP) faces a tough challenge from the Druk Phuensum Tshogpa (DPT), winner of Bhutan’s first election in 2008, and two other parties.

The registered voters in the 47 national assembly demkhongs in 20 dzongkhags, the polling teams in 865 polling stations, 49 offices of the returning/ assistant Returning officers and the ECB head Office are all set to conduct the polls today, the commission’s report states.

“The election machinery is in state of readiness to conduct the polls for our historic elections,” Chief Election Commissioner Chogyal Dago Rigdzin said. “All polling teams have arrived at the 865 polling stations across the nation. We are confident and look forward to the participation of all voters in the exercise of the most precious gift: Your Vote!”

A total of 438,663 (224,555 -female and 214,113 -male) are registered as voters as of July 1, the qualifying date for the National Assembly Elections. Of the total, 133,759 had registered as postal voters. The commission has commissioned and distributed 1,730 EVMs with a spare EVM each to all polling stations.

Trashigang has the highest number of registered voters at 47,614 while the lowest is in Gasa at 2,064.

On the eve of the poll day, the chief election commissioner presents the state of readiness report to the nation, the spokesperson and head of election department Sonam Tobgyal said.

He said the commission tests the SMS system to assess the connectivity of the SMS gateway system. All presiding officers are connected to the SMS system where they report every two hours on the voter turn out at the polling stations. The two-hourly voter turnout reports would be uploaded on the commission’s website and the digital display board on the

The Embassy Of Germany Organized Two Charter Flights For Repatriation of Tourists By NEW SPOTLIGHT ONLINE 12 hours, 51 minutes ago