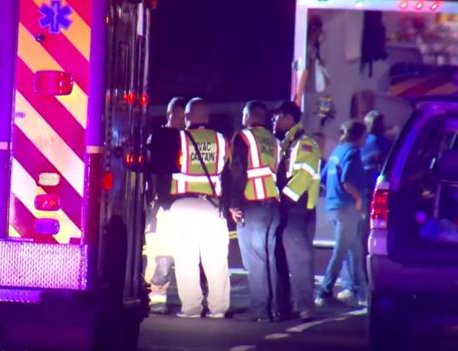 Twenty people have been killed in a crash involving a stretch limousine taking people to a party in the US state of New York, police say.

All 18 people in the limousine died along with two pedestrians in the incident on Saturday afternoon in the town of Schoharie, police confirmed.

Witnesses described seeing the SUV-style limousine shoot across a junction, hit another car, and then plough into people in a shop car park.

The cause of the crash is unclear.

The victims have not yet been officially named but the New York Times reported that they included four sisters and at least two pairs of newlyweds. All those killed were adults, police said.

Early reports suggested the car had been taking the group to a wedding reception but later reports said they were travelling to a birthday party.

State police said on Sunday that the passengers in the limousine, described as a 2001 Ford Excursion, would not have been required to wear seatbelts.

Bill Waterson, who said he was invited to attend the wedding that the limousine was travelling from, said he could not believe what he had witnessed, describing it as "terrible", the Albany Times Union reported.

A reporter for local news site Spectrum News, Mercedes Williams, tweeted images and footage from the scene of the incident, which took place near a store and cafe on routes 30 and 30A in Schoharie County.

Eyewitnesses said that a number of people entering and leaving the store were hit in Saturday's incident, local media report. 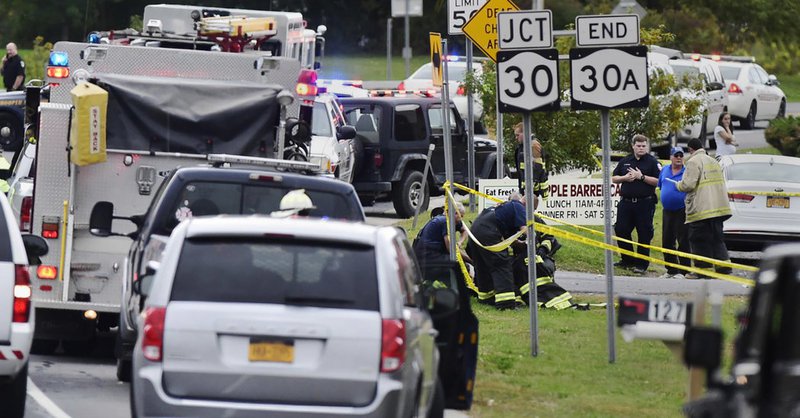 "I heard this loud bang, I saw a lot of people here at the Apple Barrel [store and cafe] out in the parking lot. Then I heard screaming," said Bridey Finnagen, who lives nearby.

New York State Police Cpt Richard O'Brien said on Sunday that the investigation was still in its early stages, adding that several separate police units were involved, including an identification unit and a drone team.

The National Transportation Safety Board (NTSB) tweeted that it was also sending a team of investigators to the site of the crash.

NTSB chairman Robert Sumwalt later told a press conference that it was "one of the biggest losses of life we've seen", adding that it was the most deadly transportation accident since 2009.

Authorities have said they expect investigators to be at the scene for at least five days.

Police said that a phone line had been set up to help assist relatives of the victims.

The location of the intersection is said to be in a hilly region and local authorities had only recently banned large trucks from using sections of the route.

Situation In China-India Border Area Is Stable And Under Control: Chinese Foreign Ministry By NEW SPOTLIGHT ONLINE 4 days, 18 hours ago