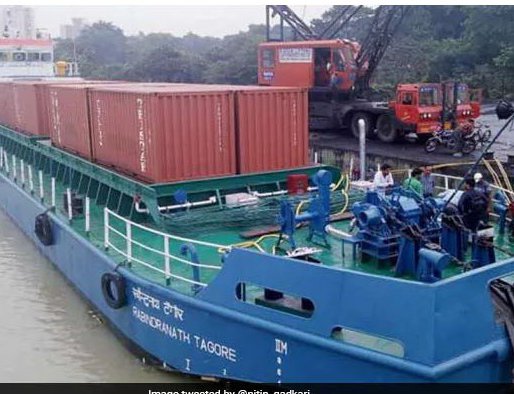 In a major milestone for India's push to develop its inland waterways, 16 containers have set sail from Kolkata for Varanasi on a vessel along the Ganga river, also called National Waterway-1. Calling it the "biggest news" in the country this week, Union Transport Minister Nitin Gadkari, said, "For the first time since independence, a container is moving on [an] inland vessel."

The containers on the MV Rabindranath Tagore vessel, being transported by food and beverage giant PepsiCo is expected to reach its destination on November 12 and will be received by Prime Minister Narendra Modi in his parliamentary constituency.

The vessel will make its return journey with fertilizers belonging to Indian Farmers Fertiliser Cooperative Limited (IFFCO), which will be procured from its Phulpur plant near Allahabad.

For Nepal’s Prime Minister K.P. Sharma Oli, who urged people last year to prepare the goods to send to Kolkata port through Kosi, this bring closer. However, Nepal has to spend huge amount of money to operate the Vessel from Kureli to Birpur Kosi Barrage.

According to the expert, the current level of water in Kosi river is low to operate vessels.

Minister Nitin Gadkari termed in twitter that this should have been the biggest news of the week in India. For the first time since independence, a container is moving on inland vessel. PepsiCo is moving 16 containers from Kolkata to Varanasi on vessel MV RN Tagore, over river Ganga.

The containers on the MV Rabindranath Tagore vessel, being transported by food and beverage giant PepsiCo is expected to reach its destination on November 12 and will be received by Prime Minister Narendra Modi in his parliamentary constituency.

The Prime Minister will also open the newly-developed waterway terminal at Varanasi built as part of the centre's ambitious Sagar Mala project.

The container vessel, which began its journey on Tuesday, is transporting 16 truckloads of food and snacks, said a statement from the Ministry of Shipping.

With the Sagar Mala project, the government aims to reduce rail and road traffic, handling costs, pilferage and damage, and enable cargo owners to reduce their carbon footprints.

Under it, 266 ports are set to be modernised with a total investment of more than Rs. 1.45 lakh crore over the next 10 years. The central government is also developing NW-1 under the Jal Marg Vikas Project, from Haldia to Varanasi - a distance of 1,390 km - at a cost of around Rs. 5,369 crore, with technical and financial assistance from the World Bank.

Union Shipping Secretary Gopal Krishna said the "cargo movement to the east and northeastern states will become easier with the new mode of transportation through waterways."

With Courtesy to NDTV for photo and news