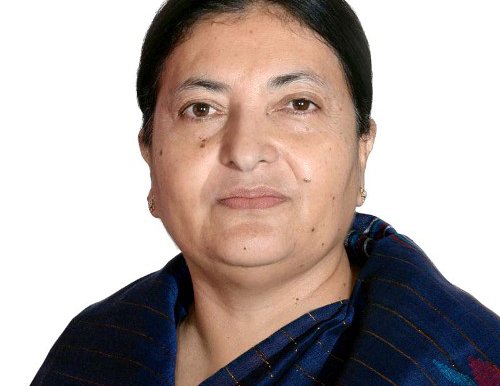 President Bidya Devi Bhandari is leaving for Katowice, Poland on 01 December 2018 leading the Nepali delegation to the 24th Conference of the Parties to the United Nations Framework Convention on Climate Change (COP 24) being held from 02- 14 December 2018.

On the 2nd of December, President Bhandari will address Nepali community members at a program to be organized by the Embassy of Nepal, Berlin, which is also concurrently accredited to the Republic of Poland, and NRNA, Poland.

President Bhandari will attend the official opening ceremony of COP 24 and will address the High-Level Segment of the COP 24 on the 3rd of December. In the morning of 03 December, President of the UN General Assembly María Fernanda Espinosa Garcés will call on President Bhandari on the sidelines of the conference.

In the evening, President Bhandari will attend the official dinner to be hosted by the President of the Republic of Poland in honor of the Heads of State/Government attending the COP 24.

The President will hold bilateral meeting with the President of the Republic of Poland Andrzei Sebastian Duda, on the 4th of December in Katowice.

President will be accompanied by Shakti Bahadur Basnet, Minister for Forest and Environment. Members of the Federal Parliament Purna Kumari Subedi, Krishna Gopal Shrestha, Pushpa Bhusal Gautam, Ramshaya Prasad Yadav and Chanda Chaudhary as well as senior officials at the Office of the President, Ministry of Foreign Affairs and Ministry of Forest and Environment will also accompany the President as members of the delegation.

According to a press release issued by Ministry of Foreign Affairs Kathmandu, President will return on 5 December 2018 and arrive in Kathmandu in the morning of 6 December 2018.