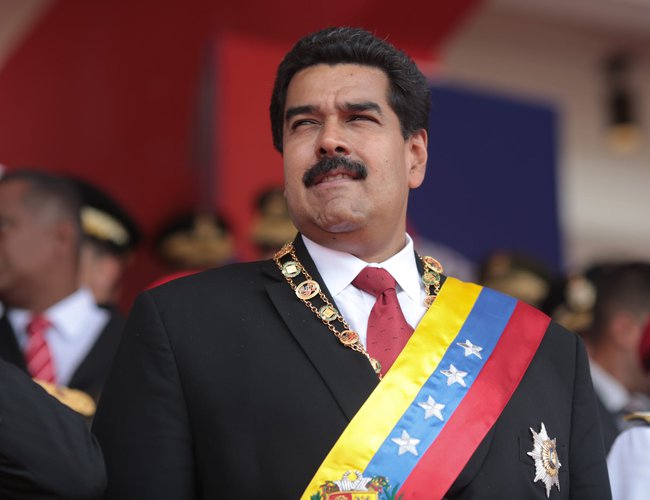 Mr Guaidó has declared himself interim president and won support from major powers including the US.

Mr Maduro said that whether there was war would depend on the "madness" of the US and its allies.

But Mr Guaidó rubbished the suggestion as an "invention" of his presidential rival.

Pressure grew on Mr Maduro on Monday when more than half of the countries which make up the European Union said they recognised Mr Guaidó as interim leader.

It follows the rejection of of a deadline set by the UK, France, Germany, Spain and others for President Maduro to call new elections.

He was sworn in last month for a second term after disputed elections which many opposition leaders did not contest because they were in jail or boycotting them.

In response, Mr Guaidó, who is head of Venezuela's National Assembly, said the constitution allowed him to assume power temporarily when the president was deemed illegitimate.

Why is civil war being raised?

Mr Guaidó was commenting on an interview Mr Maduro gave on Sunday.

Asked on Spanish television if the crisis in Venezuela could lead to civil war, Mr Maduro said "no-one could answer that question with certainty".

"Everything depends on the level of madness and aggressiveness of the northern empire [the US] and its Western allies.

"We ask that nobody intervenes in our internal affairs... and we prepare ourselves to defend our country."

The US has said military invention remains an "option".

But in a speech on Monday, Mr Guaidó said: "There is no possibility of a civil war in Venezuela, it is a Maduro invention."

He also accused the Maduro government of trying to move up to £1.2bn (£0.9bn) in public funds to Uruguay, but did not offer any evidence.

How does the rest of the world see the crisis?

Other EU nations, such as Greece and Ireland, have called for fresh elections but stopped short of recognising Mr Guaidó.

Mr Maduro retains powerful allies, most notably China and Russia, who has accused EU countries of interfering in Venezuela's affairs and attempting to "legitimise usurped power". 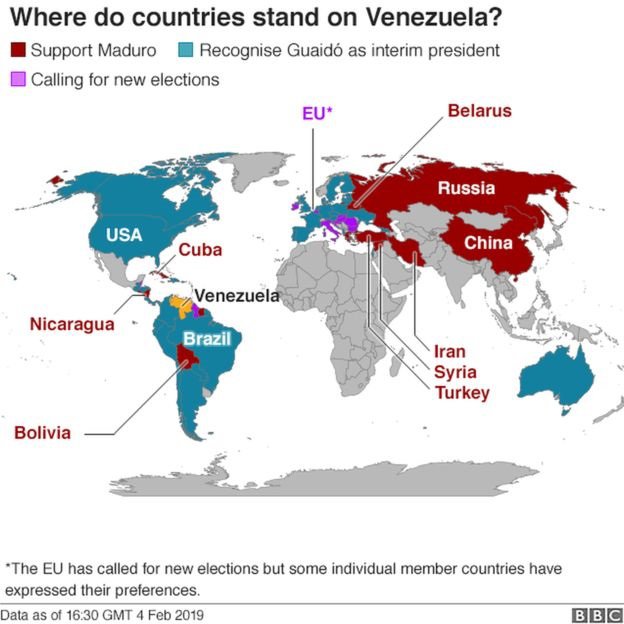 The Venezuelan president also retains the crucial support of the army.

In his speech Mr Guaidó, who is trying to organise aid deliveries, said the military faced "an important choice" when aid arrived at the border.

His representatives are to host emergency talks on delivering aid at a conference on 14 February in Washington, AFP reports. Mr Maduro has rejected letting aid into the country, saying it would be a pretext for military intervention.