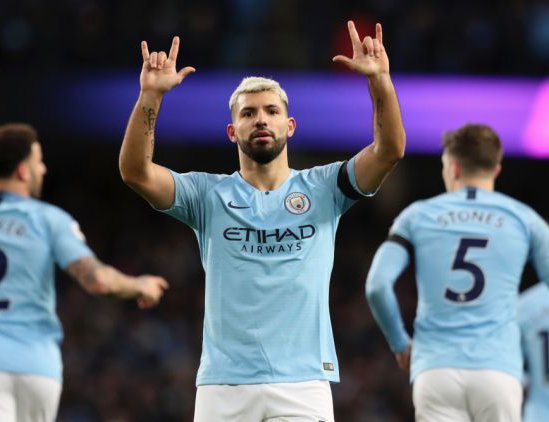 Manchester City’s Sergio Aguero equalled former Blackburn Rovers and Newcastle United striker Alan Shearer for most hat-tricks in a Premier League game during City’s mauling of Chelsea at the Etihad Stadium. Played on Sunday (February 10), Aguero scored thrice despite missing an absolute sitter from a yard out in the first half. Both Aguero and Shearer have 11 Premier League hat-tricks to their name.

City ran out 6-0 winners with goals also from Raheem Sterling, a brace, and Ilkay Gundogan. The three points took Manchester City top of the league – level on points with Liverpool but with a better goal difference. Liverpool, however, have a game in hand.

Aguero got his scoring evening underway with a screamer from 25 yards out to double City’s lead after Sterling got the opener inside four minutes. The Argentine got his second when he made the most of a Ross Barkley error to slot home first time. The hat-trick was complete from the penalty spot after Sterling was brought down inside the Chelsea box in the second half.

Aguero was substituted on 64 minutes with Gabriel Jesus coming on. The Argentine even managed to hit the crossbar in his performance and his tally for 2019 now stands at eight Premier League goals.

‘Kun’ also became only the sixth player to score or assist 200 goals for one club in the Premier League, joining Wayne Rooney, Ryan Giggs, Henry, Frank Lampard, and Steven Gerrard.

Aguero is now the outright highest goalscorer for City, where he has overtaken Eric Brook and Tommy Johnson’s 158 top flight goals for the club.

And with 17 league goals, Aguero is level with Liverpool’s Mo Salah in the race for the Golden Boot for 2018/19.