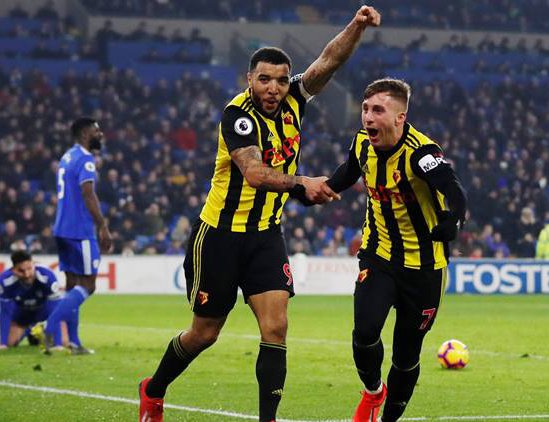 Spaniard Gerard Deulofeu bagged a hat-trick as Watford hammered lowly Cardiff City 5-1 on Friday to move up to seventh place in the Premier League. Deulofeu put Javi Gracia’s side ahead in the 18th minute with a well-placed finish after a mistake from Cardiff defender Bruno Manga.

Cardiff should have had a penalty when Daryl Janmaat’s rash challenge brought down Josh Murphy but Watford ran away with the game after the break. Deulofeu made it 2-0 with a clinical finish, rounding Cardiff keeper Neil Etheridge after a swift break in the 61st minute.

The former Barcelona and Everton winger completed his hat-trick after more poor defending from Neil Warnock’s side — Harry Arta gave the ball away in midfield and Deulofeu’s calm finish gave him Watford’s first top-flight hat-trick since Mark Falco in 1986.

Deulofeu then turned creator, bursting into the box and unselfishly teeing up Troy Deeney for a simple tap-in as Watford romped into a four-goal advantage. Cardiff, who are 17th and could fall back into the bottom three after this weekend’s games, pulled a goal back through defender Sol Bamba, who bundled the ball in following a scramble at a corner.

But Watford added further punishment with Deeney’s second in stoppage time after good work from Will Hughes. “It was a very good performance,” said Watford boss Gracia.

“To win here is not easy. To win like we did today was outstanding. I am very proud of all my players,” added the Spanish manager. “We found the spaces and scored different goals – in counter-attack and in possession games,” he added.

Cardiff manager Neil Warnock said his players had been fuming over the denied penalty when they came in 1-0 down at the break. “We got mauled in the end. It looks bad in the paper. I have never seen the players like that at halftime,” he said.

“Everyone was talking about the penalty that hasn’t been given. Nobody can understand it. Decisions like that change the game. I can’t understand why it wasn’t given, it’s a blatant penalty.

“It’s no excuse for conceding five but everyone in the game knows it changes things. If you can’t give decisions like that at this level you shouldn’t be refereeing.”