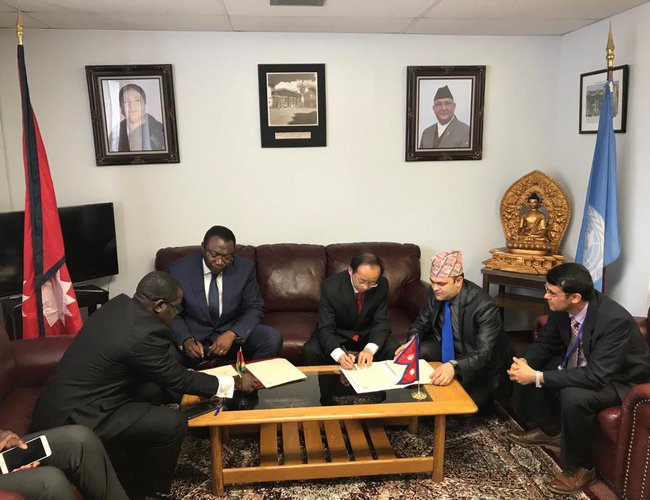 On the occasion, the two Ambassadors shared their confidence thatthe diplomatic ties will help bring the two countries and peoples closer on the bilateral front, while continuing to work closely at multilateral forums. They also expressed views on the steps to further deepen and widen the scope of mutual cooperation in the future.

They also jointly informed His Excellency António Guterres, Secretary-General of the United Nations, about the establishment of Nepal-Togo diplomatic relations today.

A country in the West Africa, with its capital at Lome, Togo is bordered by Ghana to the west, Benin to the east, and Burkina Faso to the north.

Togo became member of the United Nations on 20 September1960 following its independence from France in 1960.

Both Nepal and Togo are least developed countries and members of the Group of 77 as well as the Non-Aligned Movement.

Nepal Extends Lockdown Until June 14 And Suspended All Flights Till June 30 By NEW SPOTLIGHT ONLINE 8 hours, 32 minutes ago

More Than Half A Million Nepali Foreign Migrant Workers Registered For Repatriation By NEW SPOTLIGHT ONLINE 21 hours, 34 minutes ago