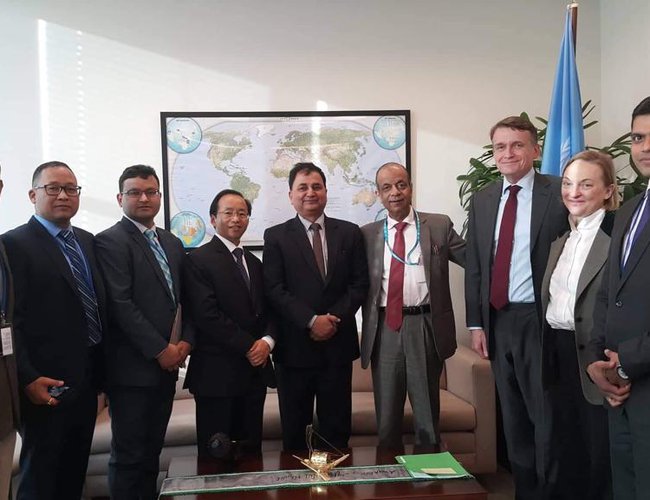 Deputy Prime Minister and Minister of Defence Ishwar Pokhrel expressed Nepal's full support to the reforms and initiatives of the UN to enhance coherence and effectiveness of peacekeeping operations.

He also called for more representation at the leadership position from the troops and police contributing countries, both at the headquarters and the fields. While appreciating the professionalism and performance of Nepali peacekeepers, Under-Secretary General Atul Khare assured UN's full support and cooperation for enhancing capability of Nepali peacekeepers.

He had a meeting with UN Under-Secretary General for Operational Support Khare. During the meeting, the two sides exchanged views on various issues including the operational challenges faced by the UN peacekeepers as well as the management of major equipment for enhancing effectiveness of the peacekeeping towards the maintenance of international peace and security.

Also present in the meeting were Assistant Secretaries-General Christian Saunders and Lisa Buttenheim from the Department of Operational Support.

Minister Pokhrel was accompanied by Amrit Bahadur Rai, Permanent Representative of Nepal to the United Nations, and other members of the visiting delegation as well as the officials of the Permanent Mission of Nepal.

The Deputy Prime Minister arrived in New York this morning leading a Nepali delegation to attend the "United Nations Peacekeeping Ministerial on Uniformed Capabilities, Performance and Protection" to be held on 29 March 2019.

He was welcomed at the John F. Kennedy International Airport by Ambassador Rai and other officials of the Permanent Mission and the Consulate General of Nepal in New York.

Madhesh Based Party Demand To Include Its Agenda In The Amendment By NEW SPOTLIGHT ONLINE 6 hours, 17 minutes ago