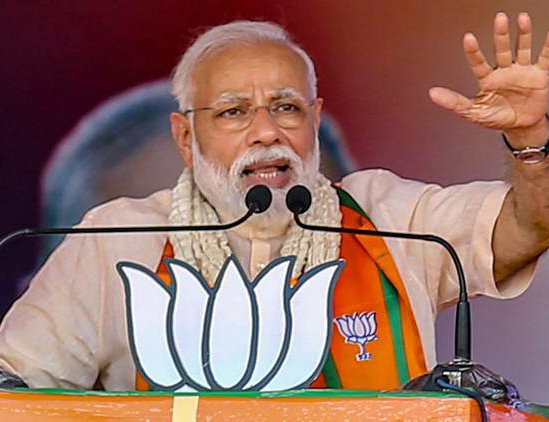 Accusing the Congress party of coining the term “Hindu terror” and attempting to “taint the fundamental ethos” of the country, he said it had committed the “grave sin” of “insulting Hindus” by “lowering” their “image in the eyes of the world”.

For the time in his election speeches, Prime Minister Narendra Modi on Monday referred to the acquittal of the accused in the Samjhauta Express blasts case to step up his attack on the Congress. Accusing the party of coining the term “Hindu terror” and attempting to “taint the fundamental ethos” of the country, he said it had committed the “grave sin” of “insulting Hindus” by “lowering” their “image in the eyes of the world”.

Addressing a rally in Wardha, his first in Maharashtra, Modi linked Hindu “awakening” — “jisko unhone atankwadi kaha hai woh ab jaag chuka hai” — to Congress president Rahul Gandhi’s decision to also contest from Wayanad, saying the party was “running away from majority-dominated areas” to “take refuge in areas where the majority is in minority”. He said the “Congress can run as much as it wants but it will never be forgiven for this sin”.

Referring to the Samjhauta Express blasts case acquittals, Modi said: “Some days ago, the court delivered its verdict which is bringing out the truth of this Congress conspiracy before the nation. The Congress committed the sin of insulting Hindus, attempted to taint the fundamental ethos of the country, and committed the sin of lowering the image of every citizen in the eyes of the world. Brothers and sisters, can such a Congress be forgiven?… the Congress has committed a grave sin (bahut bada paap kya hai Congress ne),” he said.

He said it was Congress leader Sushil Kumar Shinde who, as a minister at the Centre, had referred to Hindu terror during a speech he made in Maharashtra.

“The Congress attempted to taint crores of people of this country with Hindu terror. Tell me, did you or did you not feel deeply hurt when you heard the word Hindu terror? Has there been any incident of Hindus resorting to terror in the history of thousands of years? Any one incident? Even British historians never mentioned that Hindus resorted to violence. Who tried to defame our culture of over 5,000 years? Who brought the word Hindu terror? Who committed the sin of calling Hindus terrorists?” he said. 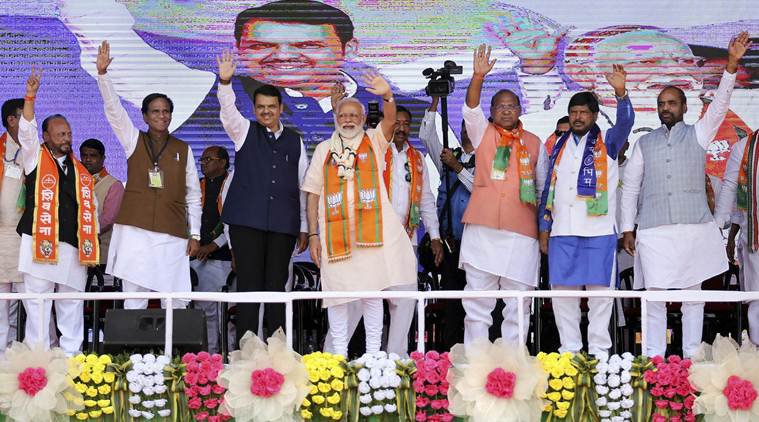 The Prime Minister referred to the Balakot air strike and said the Congress is “seeking proof” when “the whole world is marvelling at our action”. “They are saying things which are being liked in Pakistan… who do you want to choose? Heroes of Pakistan or heroes of Hindustan? Do you want proof or pride?”

Prime Minister Narendra Modi gestures as he speaks during an election rally, ahead of the Lok Sabha polls, in Wardha, Monday, April 01, 2019.

He recalled the cleanliness mission of Mahatma Gandhi, his freedom struggle from the Sevagram Ashram in Wardha, and said: “A Congress leader recently called me shauchalaya ka chowkidar (the watchman of the toilets). I am proud to be one because I have guarded the izzat (honour) of my sisters and mothers who had to go to open spaces before or after daylight. I am filled with pride. Your (Congress) abuses are like ornaments for me.”

Modi also attacked NCP leader Sharad Pawar. “He once nursed the ambition of becoming Prime Minister. But now he says he is not contesting Lok Sabha, and that he is fine in Rajya Sabha. He knows which way the wind is blowing,” he said.

PIA Plane Crashed In Karachi, Many Are Feared Dead By NEW SPOTLIGHT ONLINE 1 week, 3 days ago