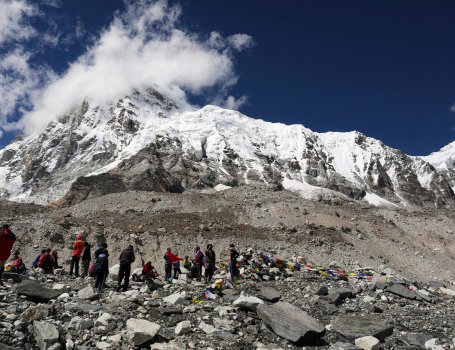 With eight days remain in the 45-day-long campaign, a total of 10,000 kilograms of solid waste has been collected so far from Mount Everest under the Sagarmatha Cleaning Campaign 2019. According to a media report,Of the total collected waste, 4,000 kg garbage has been brought to Kathmandu till date.

Department of Tourism (DoT) informed that 1,000 kilos of garbage has been handed over to Blue Waste to Value Pvt Ltd for recycling, while 3,000 kilos of the garbage is currently with Nepali Army.

DG Ghimire said that 400 kilos of garbage collected from Namche has been handed over to the Sagarmatha Pollution Control Committee (SPCC).

“Garbage collection from Mt Everest is still going on,” Ghimire said. “Our cleaning team has now reached South Col of the Everest, after cleaning Base Camp, Camp I, Camp II, Camp III and Camp IV.”

The department had expected to collect a total of 5,000 kilos of waste from Base Camp, 2,000 kilos from South Col and around 3,000 kilos from Camp II and III. The collected garbage from Mt Everest will be exhibited at Namche on May 27 and in Kathmandu on May 29 on the occasion of International Everest Day.

The department has received donations of around Rs 22.7 million till date for the Everest cleaning campaign, and support is still pouring in, Ghimire added.

Meanwhile, Ghimire said that they are also trying to bring down the dead bodies found during the cleaning campaign. However, the crowd of climbers at Mt Everest is obstructing the work to some extent.

Chinese Survey Team Expected To Reach Summit Of Mt. Everest On May 27 By Xinhua 6 months ago