Along with other runners from around the world, British Ambassador Richard Morris took part in Everest Marathon to Help People With A Visible Difference 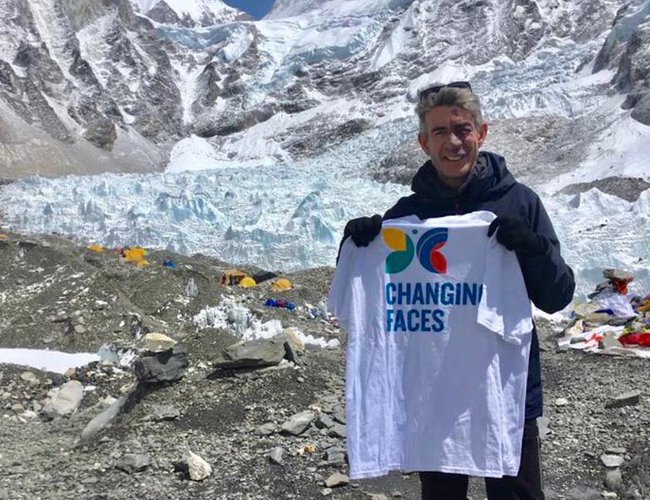 For some it is for fun, some for adventures and record. However, British Ambassador to Nepal Richard Morris ran for for raising money and awareness for two causes, changing faces with Visible Difference in UK and Burns Violence Survivors in Nepal.

British Ambassador Morris and 222 other participated in Everest Marathon held in marking Everest Day 2019. A total of 223 trail runners participated in the event, out of which there were 158 foreigners, including the British Envoy Richard Morris and 65 Nepalis, according to the Coordinator of the Marathon, Shikhar Pandey.

"I’m running the Everest Marathon (the world’s highest), to help people with a visible difference," writes Richard Morris in his article in Changing the Faces website. There aren’t many runs where you have to walk for 10 days to reach the starting line. Or where oxygen depletion is a concern at the start line altitude. Or where -26 degrees temperatures seem a possibility.

For Nepal's Burns Violence Survivors in Nepal, only medical facility to provide victims of domestic violence particularly burn patient, has been facing huge gap of fund. Ambassador Morris's decision to run shows his dedication for the cause of such victims.

"I’m wondering one more time whether participating in the Everest Marathon is the very best idea I’ve had. I’m looking forward to it with a mixture of excitement and (definitely) trepidation. I’ve always been a runner – more enthusiastic weekend trail runner than podium finisher. I’ve always tried to run wherever I’ve lived in the world, and since being 40, have run various marathons on different continents. When I was asked to present the prizes at the finish line of the Everest Marathon in 2016, I began thinking how I could get myself in shape to complete it while still in Nepal. When the organizers said they’d be happy to have me in the 2019 race, and let me raise money for charity, I couldn’t resist. So, for the last 12 months, I’ve been practicing. I run about four times a week, mainly in the gym. At the weekend, I get out of Kathmandu, where I’m based as British Ambassador, and participate in a trail run or run with Nepali friends. I’ve discovered there is a whole running sub-culture here, with lots of UK connections. Distance runner extraordinaire, former 24 hour road running and 100km world record holder Lizzie Hawker is often here. It has been great to meet her and find inspiration in her book. I’ve been inspired by meeting Nepali distance runner, multi-race winner and National Geographic Adventurer of the Year 2017, Mira Rai, too. Both are completely down-to-earth and friendly, even to this obviously amateur runner. And there are plenty of other enthusiastic Nepali, Brit and international runners here too. Some are simply happy to get out at the weekend. Some are always looking for new distance goals – the four day run around the Kathmandu Valley sounded amazing (leopards on the path anyone?). Definitely further than I was aiming, but amazing to see people you know pushing such boundaries," wrote ambassador Morris before leaving.

At the event, organized every year on May 29 as part of the Everest Day Celebration, Suman Kulung ranked first in the marathon completing the race in three hours 47 minutes and 16 seconds. The second and third positions went to Kapilder Buda and Ram Kumar Raj Bhandari who completed the race in 3:36:10 and 3:58 respectively.

Tenzing Hillary Everest Marathon is an international high altitude adventure sports event held from Mt Everest Base Camp, crisscrossing the high Sherpa trails of Khumbu valley, according to the Marathon’s official website. The Marathon celebrates the historical ascent of Mt Everest by Late Tenzing Norgay Sherpa and Sir Edmund Hillary on May 29, 1953.

The 2019 Marathon is the 17th edition of this event. Runners from all over the world can participate in their desired categories — 60 km Extreme Ultra, 42 km Full Marathon, and 21 Km Half Marathon.

Although it was a very difficult and tough task to run at high altitude, ambassador Morris is able to generate awareness throughout the world about the cause of victims.