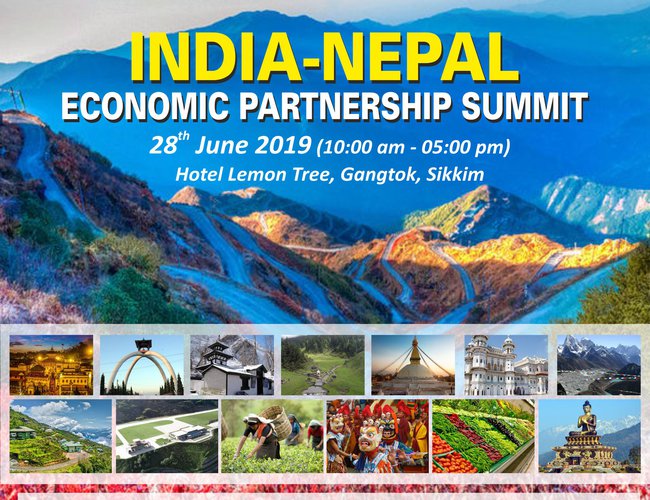 In order to explore the trade and investment opportunities and to participate in the economic development of both India’s Northeast Region and Nepal, PHDCCI under aegis of its India-Nepal Centre (INC) / State Development Council (SDC) and in association with the Embassy of Nepal, New Delhi, India will organize “India-Nepal Economic Partnership Summit” on 28th June at Hotel Lemon Tree, Gangtok, Sikkim.

The Summit will focus on the sectors where India-Nepal co-operation can be further boosted through proactive and sublime “East Connection” to achieve the desired goals for Nepal’s economic development –Tourism; Agriculture & Food Processing; Energy; Infrastructure; Healthcare; Education, Skill Development & Start-ups and Services.

The Summit is aimed to host the key industry and government stakeholders from both the countries who are either already involved with the industrial development of Nepal or have genuine urge to be part of it.

Also, the Summit will facilitate two-ways investment opportunities between India and Nepal through sensitising the Indian industry and investors (especially those located in India’s Northeast and neighbouring countries) and Nepalese counterparts to come in term with the strong possibilities that Nepal offers unwaveringly for businesses and investments.

PHDCCI has been closely working with the Government of Nepal and the leading industry bodies of Nepal. PHDCCI’s India-Nepal Centre promotes two-way bilateral economic and business relations between India and Nepal. K V Rajan, former Ambassador to India in Nepal is the Chairman of India-Nepal Centre and Atul K Thakur is its Coordinator. Nirvana Chaudhary, Vice President, Confederation of Nepalese Industries is the Chairman of Centre’s Nepal Chapter.

The objectives is to bring closer the policymakers in government and industry captains to discuss and ideate for the way forward on aforementioned themed covered in Summit and broaden the base of Nepalese economy through next-wave of economic and governance reforms. Similarly, it aims to create a sustained convergence of industry and government, for thriving on the mutually beneficial India-Nepal bilateral relations in all crucial realms with keeping in focus the “Northeast-Nepal Interface” and to create the basis for PHDCCI Policy Advocacy, for supporting the cause of policy establishments and industry at large to facilitate further Nepal’s economic development.

Other objective includes to table the discussion on improving the ties and services in the key sectors to benefit Nepal: Energy, Infrastructure, Tourism, Agriculture & Food Processing, Skill Development & Start-ups and Services. To explore the potential of road, railway and air networks in Nepal and “common factors” and leveraging on the same for attracting investment from Northeast and India at large.

To bring-in to notice the hidden potential in Border Area Development Programme and paving the way for India’s major involvement in helping the infrastructural facelift of Nepal’s bordering districts in West Bengal and Bihar – and making them the gateways of Northeast-Nepal Trade Connection.

To discuss and ideate for making Cluster-based Economic Zones across Nepal.

To further relaxing the cross-border trade norms to secure and sustain the greater economic engagements.

Through the Summit, the efforts are being made to create and sustain a framework of deeper regional and sub-regional economic cooperation.