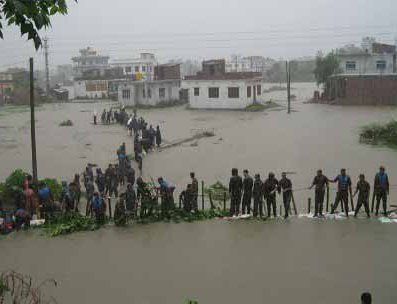 Nepal’s leading newspapers came with headlines in recent days blaming India's embankments for flood and inundation in bordering areas of Nepal. Even social media like Twitter and Facebook handles viewed the flood in the same perspective as the leading daily news papers.

On the other side of the border, the story is not different. India’s leading newspapers, published from close to Nepal border, have reverse headlines. Dainik Jagaran, Nawbharat Times and New Indian Express, The Times of India reported that India faced flood due to opening of dam gates in Nepal.

Although hundreds of people have died and tens of thousands of people have lost their homes on both sides of the political boundary, the coverage in newspapers published from both the sides and reactions in social media have shown their ignorance of the real issue.

First of all Nepal does not have big dams which will produce such floods and India too has not built embankments throughout its border areas that can prevent water draining from Nepal to India. Of course, both the countries have constructed some infrastructure to intervene the flow of waters.

JP Gupta, former minister and political leader from Saptari, a flood prone district adjoining Kosi, in his tweet writes neither geography of Bihar or UP can increase height nor our mountain and Himal can reduce their size. However, water always flows downstream. India might have the capability to build parallel dams in Nepal India border but blocking the water is not like air strike. Nepal has to make this an agenda and Pahad and Madhesh need to work together.

JP Gupta is more reasonable in the sense that he is very mild in his blame to India. NCP leader Bhim Rawal questioned whether one can term national and anti-national when I questioned the embankment built in Rautahat violating the international law.

Most of the communist and communist sympathizers are using the flood to denounce Madhesh based leaders. An NCP leaning editor of a leading paper, in a tweet, asked Madheshi leaders, who blocked the border in 2015, to repeat the same against the Indian dam?

Other side of the border too has a very antagonistic view on Nepal side. They condemned Nepali authorities for not cooperating with India to prevent this kind of crisis. As usual, politicians based in Patna urged the central government to start talks with Nepal to build high dam in Kosi River and other rivers.

Politics brings the agenda of nation and national boundary, which was the creation of last 300 years. But geography is different. The rivers, with rain floods, have been part of nature from time immemorial.

The geography of the region is such that Nepal lies in upper riparian and India is a lower riparian country. Since million of years, the monsoon rain floods out to India as it lies in the southern slope and all the rivers and streams of Nepal drain to Ganga before reaching the Bay of Bengal.

Rain and floods are natural phenomenon of geography of this region. As the region is divided on the political boundary, there appear intervention strategies to protect their citizens from hazard.

With rampant deforestation, construction of infrastructure like roads, airports and growing human settlement, the floods are intensifying. With the expansion of urban areas with modern sewerage, there is no space to retain water. Rain water almost reaches the rivers as soon as it drops from sky.

However, there are few technical experts taking part. Either chauhanist politicians, media persons and hard core engineers are leading the debate. Engineers with social background are taking the back bench knowing that their realistic approach may be termed anti-national in both the parts.

This year the torrential rain has badly affected 23 districts, mostly in southern plain. According to Nepal Police Twitter handle, 67 people including 26 women and 41 men were killed in flood and 43 got injured, including 20 women and 23 men till 15 July. Thirty persons including 18 males and 12 females are missing.

Nepal Police also rescued 1446 people from different areas. Tens of thousands of people were displaced. The figure of casualty will further increase till the last minute. Even this is the month of July only and more floods are likely in August or till end of monsoon rain.

For the victims of the flood, it will take years to recover from the loss incurred. However, they live in the same geography and the situation will repeat again in the future.

The damage to the nation will be much higher as the flood has swept away bridges, roads, transmission lines and other infrastructure. However, people will forget the pain in the winter.

Compared to Indian citizens, Nepalese have a relative advantage as they live in higher places.

Rescuing over 2000 people in a matter of 12 hours, Nepal Army has shown it is capable to take the rescue mission effectively. Nepal Police and Nepal Armed Police are also handling the disasters in a coordinated manner with Nepal Army.

Civil society organizations and international humanitarian INGOs have been supporting rehabilitation. Similar is the situation in India. They too have strong capacity for rescue and rehabilitation.

As Nepalese have been suffering from flood, the situation of Bihar and Utter Pradesh is not different. Flooding created havoc in Bihar after several rivers breached their mud embankments, inundating new areas in around a dozen districts.

The floodwaters have damaged roads, railway lines, uprooted electricity poles and brought down many homes. Bihar chief minister Nitish Kumar conducted an aerial review of the flood-affected areas to examine the overall situation.

Hapless villagers have fled to higher ground and are taking shelter along railway lines or river embankments after floodwater entered their homes. Although the administration claims to have put 14 motor boats and 170 boats into service to evacuate villagers trapped in their flooded homes, this is proving to be insufficient.

A peculiar scene was witnessed in the Forbesganj block of eastern Bihar’s Araria district where a newly-wed couple had to use a makeshift boat made of empty drums and bamboo logs to reach their home from the wedding venue as the village road was washed away.

A report from the water resources department said major rivers such as Bagmati, Kamla Balan and Bhutahi Balann breached their mud embankments at seven places in three districts of Sitamarhi, Jhanjharpur and Darbhanga, inundating many villages.

Meanwhile, all 56 gates of Kosi barrage at Birpur in Supaul district have been opened following the rise in water levels of the Kosi river, caused by heavy rains in catchment areas of Nepal.

The flood situation has also turned critical in Sitamarhi, Muzaffarpur and Sheohar where water has entered several villages, prompting residents to flee their homes with their cattle and belongings.

Chief minister Nitish Kumar held a meeting with officials of the water resources, disaster management and road construction departments on Sunday and ordered them to keep a watch on rising water level of rivers, discharge from barrage and condition of river embankments round the clock to respond to any kind of emergency, before leaving for aerial survey.

Water resources minister Sanjay Kumar Jha said his department has built a massive network of some 3,800km of embankments, so far, to contain and regulate flood water in the state.

“For the Kosi, Baghmati-Adhwara basins, we have already installed a 72-hour early flood warning facility. Next in line is the Gandak basin,” the minister said adding they were also close to putting up a Real Time Data Acquisition System in 5 river basins and 18 reservoirs in the state.

Bihar’s man opposition the Rashtriya Janata Dal (RJD) slammed the chief minister for the prevailing flood situation in Bihar and alleged the ruling regime didn’t take adequate preventive measures to contain floods, rather it continued on blaming “Nature and rats” for this situation.

“Many districts of Bihar are facing floods but instead of launching relief and rescue measures, the ruling government is working on the plan to blame Nature and rats for the floods,” alleged former chief minister Rabri Devi. She also asked chief minister Kumar to reveal how much amount was spent on chalking out long term plan to contain floods during his 14-year-old tenure.

At least 88 people have died and tens of thousands have been displaced after torrential monsoon rains triggered floods and landslides across Nepal and parts of South Asia.

At least 64 people have died in Nepal, with a further 31 people identified as missing and more than 2,500 rescued, Ministry of Home Affairs said. Search and rescue efforts have been stepped up, with multiple federal agencies, the Nepalese Army, and paramilitary forces mobilized.

In neighboring India, 14 people have died on the northeastern state of Bihar, which lies on the India-Nepal border. The death toll there is "bound to increase," said Pratyaya Amrit, a senior official at the Bihar Disaster Management Department, as flood waters retreat and reveal the true extent of the damage.

A total of 19.6 million people across 12 districts have been affected by the flash floods, Amrit added. About 46,000 people in Bihar have been shifted to temporary shelters, and national and state disaster relief teams have deployed in the region.

Already, 16,520 households in Nepal have been displaced, according to the Ministry of Home Affairs. Rescue teams continue to evacuate residents, pushing inflatable dinghies through flooded streets and helping children and the elderly to safer areas.

The monsoon rains began to inundate low-lying towns and villages, with tens of thousands evacuated after major rivers swelled to dangerous levels, according to the Nepalese Ministry of Home Affairs.

Regions of Nepal on the southern border, like the Bara District, have seen more than 400 millimeters (15.75 inches) of rain in the past few days, according to satellite estimates. The rain is still pouring, with some western areas expected to receive up to 250 millimeters (9.84 inches) in the next 48 hours, said Nepal’s Department of Hydrology and Meteorology.

The monsoon rains bring both relief and disaster every year -- they bring much-needed water to drought-hit regions, but the sudden downpours also trigger floods and landslides, especially fatal in areas without sufficient water storage infrastructure.

In 2017, Nepal had some of the heaviest monsoon rain in recent years, with floods killing at least 143 people and damaging nearly 80,000 houses. Another severe monsoon season in 2014 killed over 100 people in Nepal, and displaced more than 17,000 families.

Politicians have been taking the flood to blame opposition and some elements are taking flood to fan nationalism. Officials are pursuing enhancement of rescue capability and capacity.

However, people need remedy and people need the protection from the flood. They don't want to see loss of life. For this, countries have to start talking on geography keeping aside the petty political issue.

Flood and rain do not have anything to do with politicians. Floods do not come to make a politician nationalist. This is neither an issue of India bashing nor Nepal bashing.

Flood and rain have their geographical dynamics which has nothing to do with politics or political boundary. Flood and rain are part of the nature, the entire geography of the region existed with this reality. To minimize the effect, the experts need to sit together for minimizing the damage and human suffering. 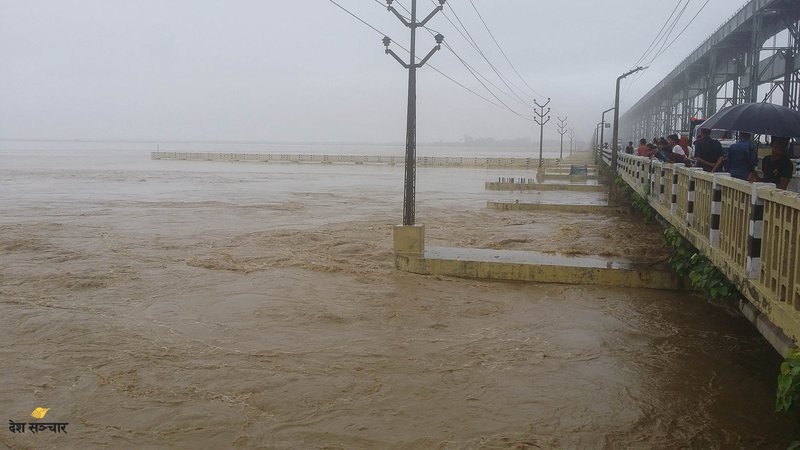 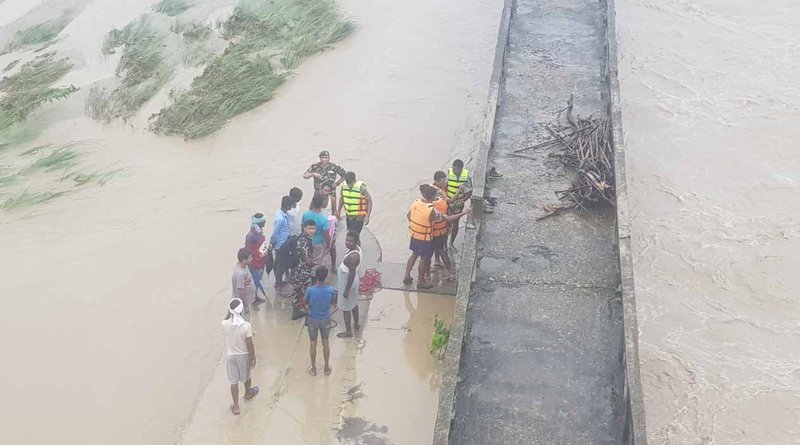 NEPAL ARMY Operation Clean Mountain By A Correspondent 1 day ago

India Tightens Security At Jamunah Checkpoint In Nepalgunj By Agencies 1 day, 3 hours ago