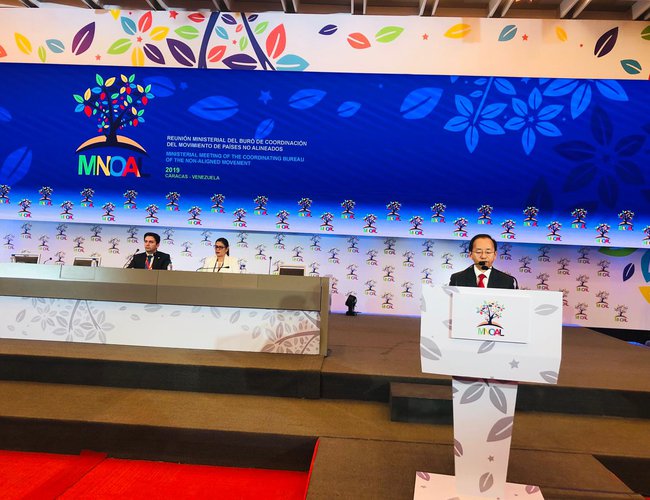 Nepal participated in the Ministerial Meeting of the Coordinating Bureau of the Non-Aligned Movement (NAM) held on 20-21 July 2019 in Caracas, Venezuela.

Speaking at the general debate organized under the theme of “Promotion and Consolidation of Peace through Respect for International Law", Amrit Bahadur Rai, Ambassador and Permanent Representative of Nepal to the United Nations in New York and the head of Nepali delegation, expressed Nepal’s resolve, as a founding member of NAM, to play an active and constructive role to strengthen and revitalize the NAM in upholding its principles, principles of international law and charter of the United Nations for sovereign equality, peace and prosperity in the world.

While highlighting the success of Nepal’s home-grown peace process, Ambassador Rai stressed the importance of dialogue for the pacific settlement of disputes.

Nepali delegation also participated in the opening session of the Ministerial meeting which was chaired by Jorge Arreaza, Minister of the People’s Power for Foreign Affairs, Republic of Venezuela.

In the capacity of the presidency of the Non-Aligned Movement since 2016, Nicolás Maduro, President of the Republic of Venezuela, addressed the plenary session of the Ministerial Meeting yesterday afternoon.

Also, in the presence of Maduro, the plenary session of the Ministerial Meeting adopted the “Caracas Final Document” and the “Caracas Political Declaration” which were negotiated in New York.

Later yesterday, Nepali delegation attended a dinner program hosted by the Minister of the People’s Power for Foreign Affairs, Republic of Venezuela, in honor of the heads of the delegations to the Meeting.