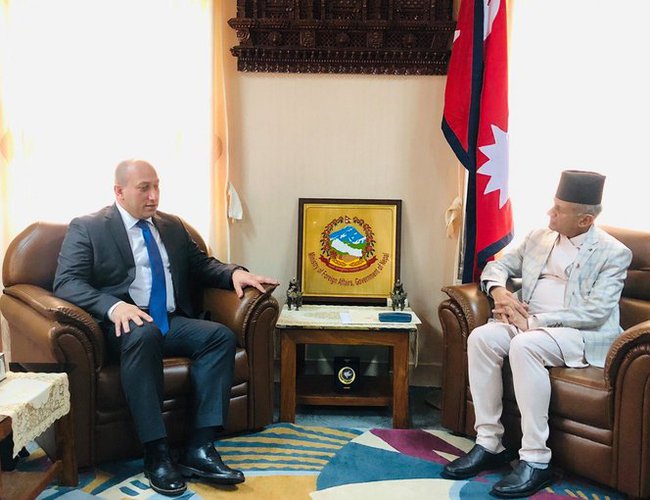 First Nepal-Georgia Bilateral Consultations was held at the Ministry of Foreign Affairs in Kathmandu today.

Foreign Secretary Shanker Das Bairagi and the Deputy Minister of Foreign Affairs of Georgia Alexander Khvtisiashvili led their respective delegations to the Consultations.

During the Consultations, the two sides reviewed diverse aspects of bilateral relations and exchanged views on further promoting cooperation between the two countries at bilateral, regional and multilateral levels.

On the occasion, the Agreement on visa waiver for Holders of diplomatic, official or service passports was signed.

Following the Consultations, the visiting Deputy Minister Khvtisiashvili called on Minister for Foreign Affairs of Nepal Pradeep Kumar Gyawali. The matters of mutual interest were discussed during the meeting.

The Georgian delegation consisted of Ambassador of Georgia to Nepal. Archil Dzuliashvili, Director of the Department of Asia and Pacific of the Georgian Foreign Ministry David Kereselidze, Senior Counsellor at the Georgian Embassy in New Delhi Nana Gaprindashvili as well as the Honorary Consul of Georgia in Kathmandu Shiv Ratan Sharda. The Nepali delegation included senior officials from the Ministry of Foreign Affairs, Ministry of Defense and Ministry of Culture, Tourism and Civil Aviation.

Nepal Extends Lockdown Until June 14 And Suspended All Flights Till June 30 By NEW SPOTLIGHT ONLINE 1 day, 7 hours ago

More Than Half A Million Nepali Foreign Migrant Workers Registered For Repatriation By NEW SPOTLIGHT ONLINE 1 day, 20 hours ago