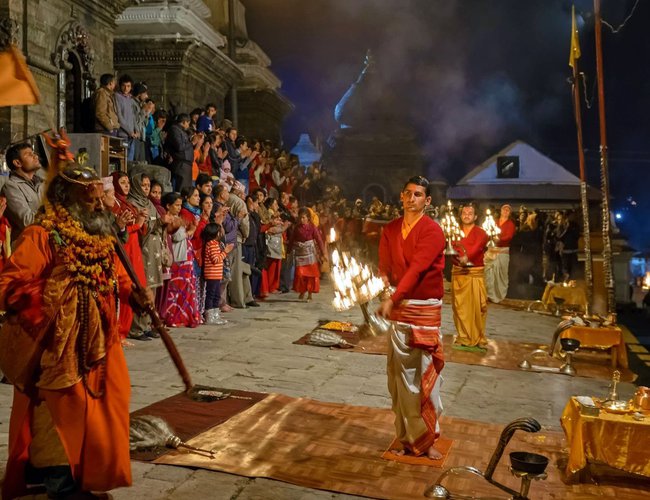 The Pashupati Area Development Trust has announced that it will take action against arati group for not playing the national anthem prior to performing aarati, a Hindu ritual in which deities are hailed, at Pashupatinath temple reports The Himalayan Times.

The Bagmati Aarati Pariwar started playing the national anthem from August 30 as per the instruction, but did so only till September 3. This has prompted PADT to take action against the Pariwar.

“We will be forced to ban the Pariwar from performing aarati at the temple if it does not follow our instruction,” PADT Member Secretary Pradeep Dhakal said. "If they continue to ignore our calls, we will ban them and start performing the aarati on our own,” said Dhakal.

In its recent decision, the Bagmati Aarati Pariwar,which has been performing Ganga Aarati every evening at Pashupatinath temple for the last 12 years, has decided not to play national anthem.

According to the newspaper, on August 26, Minister of Culture, Tourism and Civil Aviation Yogesh Bhattarai directed the PADT to play the national anthem before performing the aarati.

“The place where aarati is performed is located right next to the cremation ground,” said Basudev Shastri, vice chair of the Pariwar.

PM Oli Stresses The Need To End Gender Based Violence By Agencies 9 hours, 4 minutes ago

The United States In Partnership With ADB Completes Two Secondary Schools In Kathmandu By NEW SPOTLIGHT ONLINE 1 day, 6 hours ago

India Provides Grant For The Construction Of New School Building In Butwal By NEW SPOTLIGHT ONLINE 4 days, 1 hour ago

338 Households Displaced In Fungling Due To Fire By Agencies 5 days, 4 hours ago