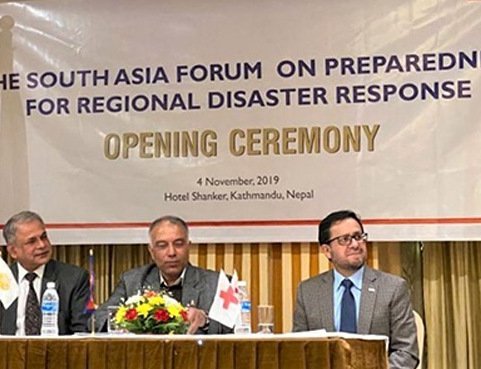 In his address, the Secretary General said, “As other regions in the world, South Asia too is prone to natural disasters. Fully cognizant of this, SAARC accords high priority to strengthening regional cooperation for preservation, protection and management of the region’s diverse and fragile eco-systems.”

He further said that at the political level, successive SAARC Summits and meetings of the SAARC Environment Ministers have provided valuable guidance for intensifying regional cooperation in the areas of environment, climate change and natural disasters.

The Secretary General said that at the inter-governmental level, the foremost initiative taken by SAARC is the preparation of the Regional Study on the Causes and Consequences of Natural Disasters and the Protection and Preservation of the Environment in 1991, followed by the institution of the Committee on Environment in 1992, which was subsequently renamed as the Technical Committee on Environment and Forestry. An Inter-Governmental Expert Group on Climate Change has also been established, he added. He stated that other important regional instruments were the SAARC Environment Action Plan (1997); Malé Declaration (2005); Comprehensive Framework on Disaster Management (2006-2015); Dhaka Declaration on Climate Change and SAARC Action Plan on Climate Change (2008), and SAARC Convention on Cooperation on Environment (2010).

He said, “Most importantly, at the Seventeenth SAARC Summit held in Malé in November 2011, our leaders adopted the SAARC Agreement on Rapid Response to Natural Disasters, which provides an effective regional mechanism to achieve substantial reduction in the loss of human life and damage to social, economic and environmental assets in the region.” The Agreement also calls upon the Member States to jointly respond to disasters by sharing and deploying resources to mitigate their impacts, he added. He further said that an Interim Unit of the SAARC Disaster Management Centre, which is operational in Gujarat, India, has been doing a commendable job in imparting knowledge and skills in disaster response and risk mitigation through workshops and seminars.

Sial said, “As a result of these endeavours at the regional level, in the recent years the countries of South Asia have been able to develop strategies to reduce damages from natural disasters. Moreover, there has been a paradigm shift in the approach to disaster management, from one of post disaster relief and rehabilitation to that of early warning, preparedness and risk mitigation.”

In concluding his remarks, he called upon the participants to work in unison to preserve the planet to ensure better future for future generations.

Organized jointly by SAARC and IFRC, the Forum brings together representatives from the Member States of SAARC and specialized agencies like UNOCHA and ADPC. The Forum will conclude on 6 November 2019.

PM Oli Adopted A Rhino By Agencies 1 day, 15 hours ago

338 Households Displaced In Fungling Due To Fire By Agencies 2 days, 4 hours ago