With so much of proximity in geography, religion and civilization, some irritants between Nepal and India are inevitable. The recent dispute on Kalapani border is natural in this regard. Everyone loves the country and border. However, the provocative anti-India demonstrations taking place in different parts of Nepal are not in the interest of Nepal 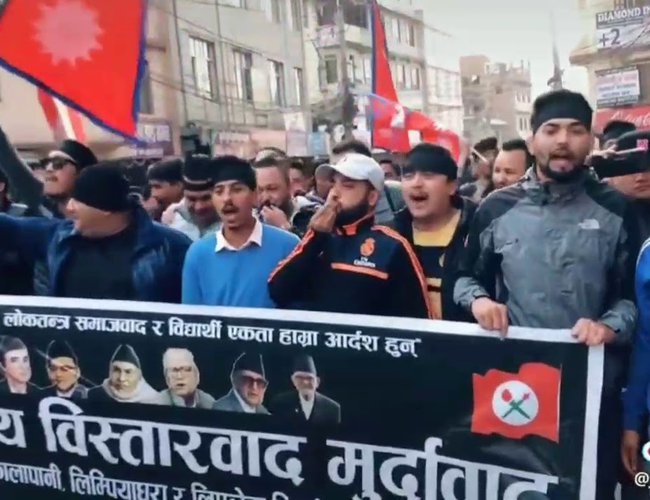 The row over the inclusion of the Kalapani region came just a day after India's Home Ministry released a new political map of India detailing the boundaries of the newly former Union Territories of Jammu and Kashmir and Ladakh.The new Union Territories came into existence last week, announced on the 144th birth anniversary of Sardar Vallabhbhai Patel. 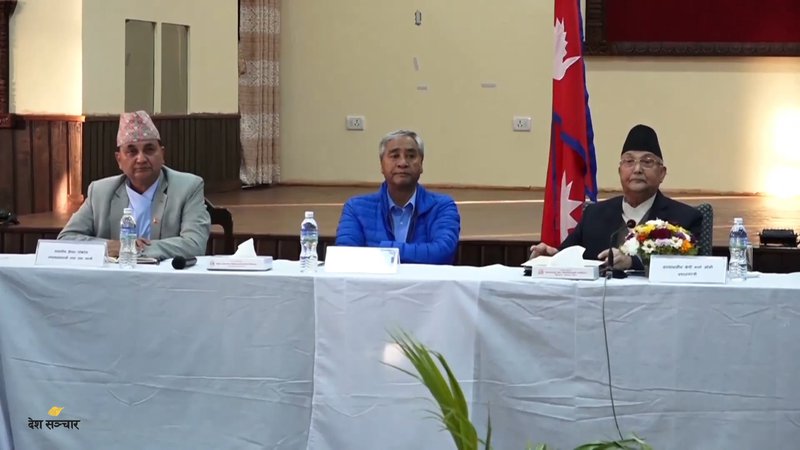 After the publication of the new map showing three new Union Territories in Jammu and and Kashmir, a leading English daily in Nepal published a map showing that Kalapani, a disputed territory of western Nepal, was included in it as Indian territory. Although India has been publishing the map since many years, news has sparked the protest as if the map is new.

This news sparked like wild fire. Intellectuals, political parties and experts, all came together pressing the government to object to the new map, which included Nepal's land in India. 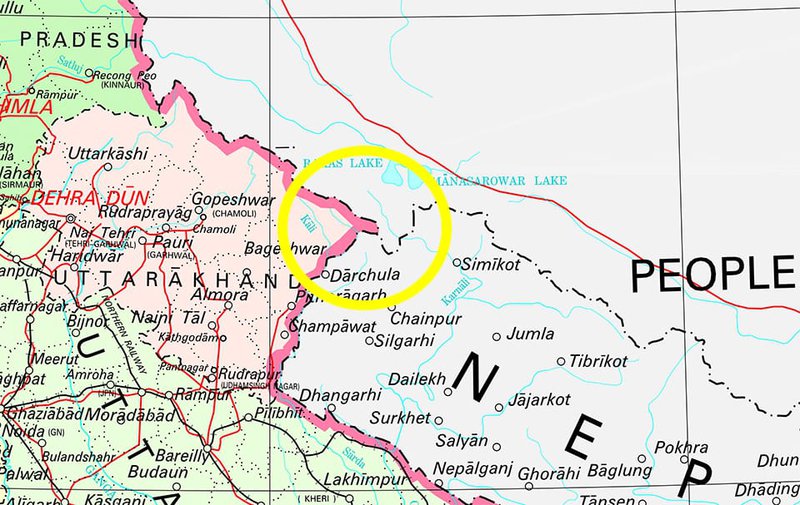 Along with different factions of communist parties in Nepal, including ruling NCP, which have a tradition of contesting elections on anti-India flank, Nepali Congress Party, which has always tried to follow the diplomatic path, issued a statement condemning India's move to encroach Nepal's land.

Not only the second-line leaders of NC like spokesperson Bishwo Prakash Sharma, Gagan Thapa and Dilendra Prasad Badu, party chairman Sher Bahadur Deuba gave a phone call to Indian Ambassador on the issue. 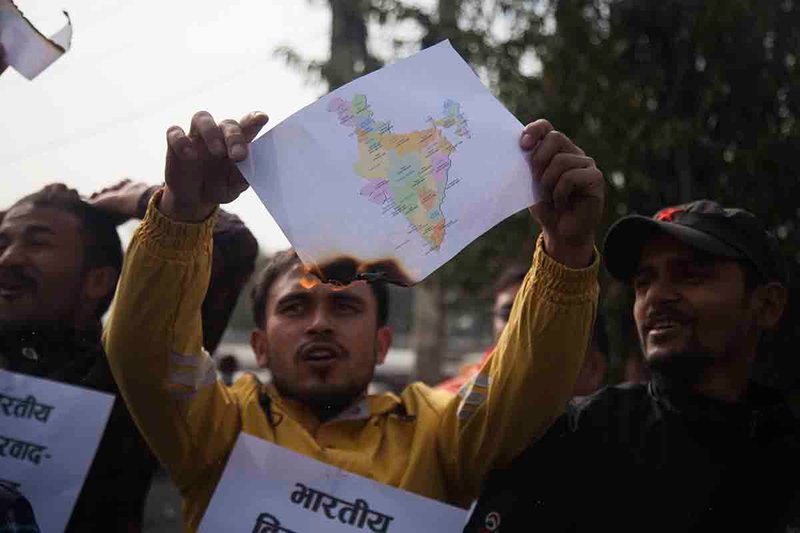 Even the students of Sanghiya Samjabadi Party led by Dr. Upendra Yadav and former prime minister Dr. Baburam Bhattarai, organized a mass demonstration in Janakpur, the capital of province 2. Known for maintaining a soft stand, Yadav's party also reportedly burnt the new map of India and effigy of PM Modi.

Although the current political parties, including Nepal Communist Party, Nepali Congress and others on the fringe, who formed a block under a New Delhi backed 12-point agreement of 2005, have been single handedly exercising state power, they are very much aware of the situation. Despite the differences on various issues, they came together to organize anti-India demonstrations and signed consensus statement urging Prime Minister Oli to take steps.

Although demonstrations and events in Kathmandu looked spontaneous, the moves and actions were well planned. Even a short 60 seconds video was made viral in social media showing how India encroach Nepal's land. However, it used most of the footage of Pakistan.

In two days, they have done everything to damage the relations. After burning the effigy and border map and holding anti-India protests, all political parties held a meeting in Prime Minister Residence Baluwatar on 9 November and finally directed the government to settle the border issue negotiating with India.

Prime Minister K.P. Sharma Oli termed all-party consensus on Kalapani border dispute was a historic political consensus to take the national issue in negotiations table. If all political parties want to settle it through diplomacy, why did they order their party cadres to launch anti-India wrath.

Although Nepal's Ministry of Foreign Affairs and India’s Ministry of External Affairs have earlier called for settling the border issue, Prime Minister Oli-led all-party meeting took the same decision, directing the government to take initiative to settle the border issue.

In its first official statement, Nepal's Ministry of Foreign Affairs has also issued a statement urging India to settle the Kalapani issue through the current foreign secretary level meeting.

India also stresses to settle the issue through dialogue. Raveesh Kumar, spokesperson for India’s Ministry of External Affairs, said that the boundary delineation exercise with Nepal is ongoing under the existing mechanism.

He said that the recently published map accurately depicts sovereign territory of India. “The new map has in no manner revised our boundary with Nepal. The boundary delineation exercise with Nepal is ongoing under the existing mechanism. We reiterate our commitment to find out a solution through dialogue in the spirit of our close friendly and bilateral relations,” said spokesperson Kumar.

In his statement, Indian foreign ministry said “both countries should guard against vested interests trying to create differences between our two countries.”

"Kalapani area is Nepalese territory. If diplomatic efforts do not work, we will take other options. We will defend our territory and sovereignty in whatever way we can," said foreign minister Pradeep Gyawali at a press meet.

Although Nepal and India share a long border demarcated by rivers, mountains and plain land, it is natural to see the disputes. Deciding the political boundary on such a geography is challenging.

The border between Nepal and India as decided by Sugauli treaty is Kali or Mahakali river. Due to difficult terrains, British and Nepali officials took rives Mechi and Mahakali to delineate Nepal-India east and west borders.

However, after Nepal's support to British India to quell Sepoy Mutiny in Lucknow, British India returned four districts of western region, Banke, Bardia, Kailali and Kanchanpur to Nepal. Those who are calming 1814 map as a basic arguing that Kali begins from Limpiyadhura, which is at the west of the Kalapani area. Thus Kalapani is border.

Even after after 1814 treaty map, there was a change in the map in 1857. With the changes of river course in the plain land, border of Nepal and India has been changing.

"In 1962, during India-China war, India asked and King Mahendra allowed Indian forces to be stationed in the area, due to its strategic military value then. It does not mean Nepal gave the land to India. It was only a temporary measure as a part of our goodwill," said Tej Bahadur Shrestha, an intellectual.

"The border of western Nepal is the river Kali or Mahakali," said Buddhi Narayan Shrestha. India's new map encroached our sovereignty and integrity."

The Nepalese foreign ministry, in a press statement, said: "All the outstanding issues relating to the border between the two countries need to be resolved through mutual understanding and any unilateral move is unacceptable to the Nepal government".

"India-Nepal border talks have been assigned to the foreign secretaries of both the countries, "to resolve the remaining border related issues between Nepal and India in consultation with concerned technicians," said press statement of Ministry of Foreign Affairs.

The Indian map places the Kalapani area under the Pithoragarh district in Uttarakhand whereas Kathmandu considers the unresolved area to be part of Nepal's Darchula district. 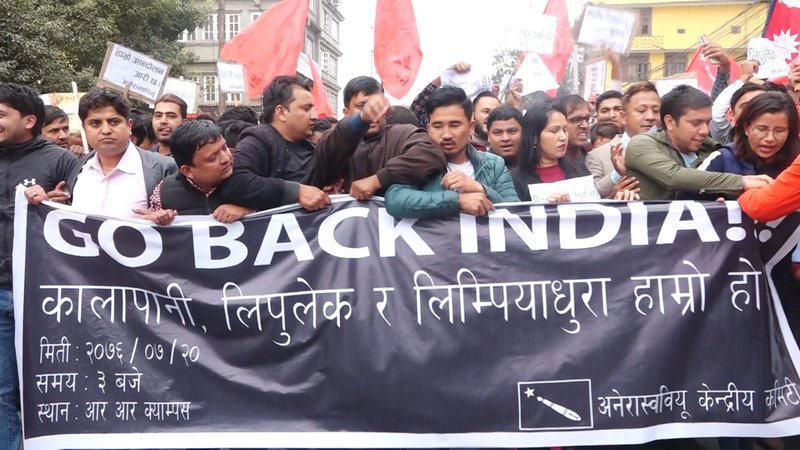 Prime Minister KP Sharma Oli’s outgoing foreign affairs advisor Rajan Bhattarai has said that both Kalapani and Lipulekh are Nepali territories and added that the government’s stance is the same. “Kalapani and Lipulekh both are our territories. The Indian army, which has been there since the Sino-Indo war in 1962, should leave the area. We need to solve all these border disputes,” said Bhattarai.

"These types of issues could only be solved by having diplomatic talks between Nepal and India. We should not act hastily. These are sensitive issues which will be dealt in an appropriate manner,” he said.

Much will depend on how Nepalis address the issue. Nepal stand that “any unilateral actions along the Nepal-India border will be unacceptable” since the two foreign secretaries have already been assigned by the Nepal-India Joint Commission to find a solution on the unresolved border disputes in consultation with border experts.

New Delhi, too, has accepted that latter stance. While insisting that its new map has in no manner revised India’s boundary with Nepal, a Ministry of External Affairs spokesman also conceded that the delineation exercise with Nepal is ongoing under the existing mechanism.

So far, so good. Beyond the official channels, however, there is enough potential for mischief on both sides. Within Nepal, the temptation to play politics has proved to be irresistible, especially at a time when unity of purpose is required the most. As alluring as one-upmanship can be in these politically charged times, it can hardly matter which Nepali leader raised the issue with which Indian counterpart unless government-to-government channels were activated to follow up on a solution.

India To Fund Rs 530 Million For Reconstruction of 25 Health Posts In Nepal By NEW SPOTLIGHT ONLINE 11 hours, 4 minutes ago

Girls Under18 Represents 20 Per Cent Among Women Undergoing Safe Abortion In Karnali By Agencies 3 days, 22 hours ago

SC Concluded Hearing On Dissolution Of House Of Representatives By Agencies 6 days, 23 hours ago

India Has Supported Reconstruction Of School Building In Bageshwori By NEW SPOTLIGHT ONLINE 1 week, 1 day ago