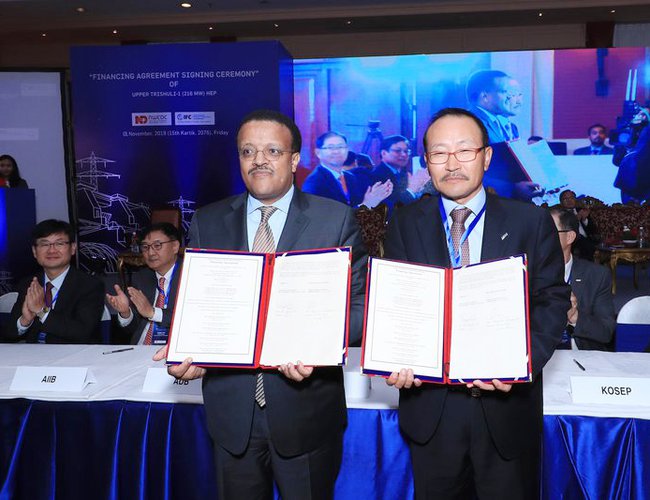 The long saga of Upper Trishuli 1, supported by IFC, a member of the World Bank Group, has come to an end following the signing of a financial closure with nine different international partners on November 2.

Although Nepali officials do not mind harping on Nepal's friendly attitudes towards Foreign Direct Investment in Nepal, only Upper Trishuli 1 can show how complex, bringing foreign investment to start projects in Nepal can be.

As a country with no international grading, bringing foreign money in Nepal remains a major challenge. However, Korean investor’s partnership with a Nepali company has found a way out in this case.

After signing the financial closure, Nepali sides have realized the importance of 216 MW Upper Trishuli 1 Project to lure foreign investors in Nepal. Although badly disrupted by earthquake in 2015, the project promoters did not give up hope.

Running from door to door and ministry to ministry, Bo-Seuk Yi, the CEO of the Nepal Water and Energy Development Company, and Nepali Promoter Brindaman Singh Pradhan made every possible effort to finally implement the project.

From PPA to hedging fund, issuing license and renewing and finding the fund, this is the first project which has seen all kinds of policy duplications and contradictions in Nepal.

"Signing the agreement for the construction of 216 MW Upper Trishuli Project is an important milestone for the hydropower development of Nepal," said Finance Minister Dr. Yubaraj Khatiwada. "This is for the first time so many important development partners are standing together to support a hydropower project." 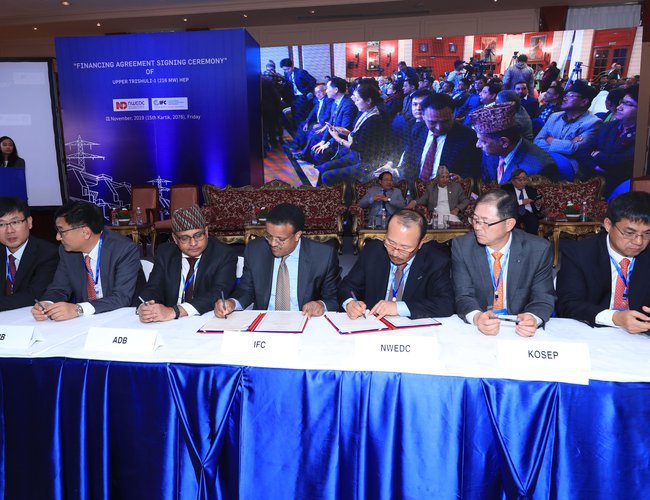 He said that Nepal has amended several acts and regulations to make Nepal friendly to Foreign Direct Investment and urged investors to come to invest in Nepal.

Situated close to the load center, Kathamndu Valley, Upper Trishsuli 1 Project will be a game changer in maintaining the valley’s power system.

This is also the first project for IFC in Nepal to invest in consortium of multi-national groups, with a private sectors of Nepal and Republic of Korea. IFC and a consortium of other lenders finalized a $453 million debt financing package that will support the construction of a landmark hydroelectric plant in central Nepal.

IFC is the lead arranger of the debt package, which includes eight other lenders, and is one of the largest foreign direct investments in Nepal’s history. The financing is being provided to the privately-owned Nepal Water and Energy Development Company.

The firm will develop and operate a 216-megawatt, run-of-the-river hydroelectric plant on the Trishuli River about 70 kilometers north of Kathmandu. Officially known as Upper Trishuli-1, the project’s financing structure, competitive tariffs, and use of internationally accepted contract standards is expected to set a standard for future hydropower projects in Nepal.

"This project is a game-changer for Nepal," said Barshaman Pun, Nepal’s Minister of Energy. "Not only will it power hundreds of thousands of homes and businesses, but it will also serve as an example of how private companies can help Nepal expand its hydropower sector and attract much needed foreign direct investment."

The plant will increase Nepal's electricity supply by one-third from today’s levels and provide clean, reliable power to some 9 million people, part of a larger effort by IFC to create markets and fight poverty in the country.

Nepal's rivers, fed by runoff from the Himalayan Mountains, could support 43 gigawatts of electrical generation capacity. But less than three percent of that has been developed. As well, the country has suffered from blackouts and brownouts, hampering businesses and making life difficult for residents.

"There is no question that Nepal has the potential to be an energy powerhouse," said Bo-Seuk Yi, the CEO of the Nepal Water and Energy Development Company. "To realize that promise, Nepal can enlist the help of private companies, which have the capital and expertise to make major projects a reality." 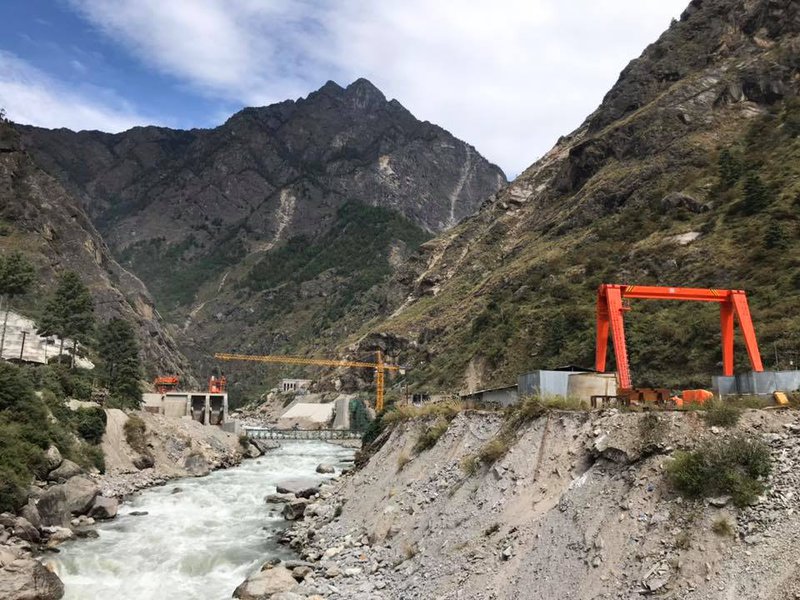 Initiated during the period of current minister of Energy, Water Resources and Irrigation Barsha Man Pun as finance minister in 2012, financial closure of the project also was finalized during his tenure. NEA’s managing director Kulman Ghising also facilitated the construction of project signing PPA with the company a year ago.

As all regulations, including hedging funds and other technicalities, havw completed and finance minister Dr. Khatiwada and Minister of Energy Pun and other senior officials from concerned ministries have expressed support for the project, there is a hopeful sign for the completion of the project in time.

If things move as projected, the new hydroelectric plant is expected to be completed in 2024. Along with providing clean, reliable power to millions, it will set new environmental and social-impact benchmarks and enhance benefits for local communities. Furthermore, a cumulative impact assessment of existing and planned hydropower projects has been completed for the Trishuli basin, which will help guide sustainable development in the watershed.

“This project represents a significant milestone in the development of Nepal’s hydropower potential as it has been able to attract meaningful private sector participation, particularly from international investors,” said Mengistu Alemayehu, IFC Director for South Asia. “It also shows the unprecedented resilience and commitment by the government, the sponsors, and other stakeholders against all odds over the years, including a major earthquake. We expect this project to become a model for expanded investments in developing Nepal’s hydropower to meet the growing domestic demand and export to the neighboring countries.”

"IFC and a consortium of Korean and Nepali partners, in collaboration with the Government of Nepal, have spent over seven years developing the Upper Trishuli-1 project, which is a prime example of IFC’s ability to create markets through upstream project preparation work over many years in low-income countries."

Nepal Water and Energy Development Company’s key owners are Korea South-East Power, Daelim Industrial, Kyeryong Construction Industrial, and IFC. IFC is providing $190 million in financing, including $95 million of equity and loans from its own account, and $95 million as the implementing entity for other funding sources.

Because of its unique development impact, pioneering features, and demonstration to private investors, the project also includes support from the International Development Association’s Private Sector Window, a global facility of concessional funds to support high-impact private sector investments in lower-income countries, the Finland-IFC Blended Finance for Climate Program, and the Climate Investment Funds.

While arranged by IFC, the loan agreements were signed to provide a total loan amount of USD 453.2 million for the Upper Trishuli-1 Hydropower Project. The loan amounts in USD signed with each of IFC, ADB, AIIB, K-EXIM, KDB, CDC, FMO, PROPARCO and OFID are 161.3 million, 60 million, 39.6 million, 100 million, 30.8 million, 21.9 million, 15.4 million, 11 million, and 13.2 million, respectively. The Bank of New York Mellon (BNY) as the Offshore Account Bank and Nepal Investment Bank (NIB) as the Onshore Account Bank were also parties to the Financing Agreements.

NWEDC is the special purpose company established by the Project’s sponsors and shareholders for the development of Upper Trishuli-1 Hydropower Project. The Sponsors of the Project are Korea South East Power Co. Ltd. (KOEN), Daelim Industrial Co. Ltd., and Kyeryong Construction Industrial Co., Ltd., and IFC and a local partner will also be shareholders.

The equity shares up to 10% will be allocated for project affected people as per local shares provision in Project Development Agreement itself. The Main Sponsor, KOEN is a Korean government-owned power generation company which owns and operates more than 10,000 MW of power plants in Korea.

"The delivery point of such energy generated is the under-construction Trishuli-3B Hub substation in Nuwakot. The project components include 29.5m high dam in Trishuli River, 9.7km long headrace tunnel, 292m high vertical pressure tunnel and an underground powerhouse. The project is located near the Kathmandu load centre and can provide a firm power of 104 MW all round the year," said the company.

Upper Trishuli-1 is the first project in South Asia to successfully complete the process of Free Prior Informed Consent (FPIC) from the local indigenous people in the project area. FPIC is expected to help create a social license for successful project construction and operation.

“This is a landmark transaction that will provide strong incentives for further private sector investment in Nepal’s energy sector,” said Chakraborty. “To ensure it provides sustainable benefits, this project will adopt international best practices in safeguards management and will also introduce measures to promote gender equality including job opportunities for women and better access to education, health care, amenities, and infrastructure.”

In his remarks ambassador to Republic of Korea to Nepal Park Young-sik said Upper Trishuli 1 Project was a litmus test for whether a foreign private funded project will work In Nepal or Not.

"Since Nepal does not have an international credit rating, it was extremely difficult for the Korean developers to find sources of loans, but they found a solution. And I hope that other foreign developers will be able to find sources of loans similarly. But in order for that to happen, this project must succeed and be a shining example," said ambassador Park Young-sik. (read opinion)

Although the project received the license long ago and started the primary works of building access roads, the Project Development Agreement (PDA) of the project was signed between the Government of Nepal and the Company on 29th Dec 2016.

Following PDA, the company singed the Power Purchase Agreement (PPA) with Nepal Electricity Authority (NEA) on 28th Jan, 2018 based on the posted rate of NEA.

In accordance with the Energy Emergency Action Plan and the USD PPA guidelines of the Government, the PPA includes a provision of Dollar payment only for the loan portion for the first 10 years, and such Dollar payment has been hedged through a Hedging mechanism where the Company will contribute one third of the hedging costs through Free energy to NEA.

The construction of the project will be done based on a fully wrapped EPC Contract. A Joint Venture of internationally renowned Korean companies - Daelim Industrial Co. Ltd. and Kyeryong Construction Industrial Co., Ltd. will carry out the main construction works.

IFC and partners have thus provided more than $450m to support the major hydro-electric plant in Nepal.