As Nepal and Israel celebrate sixty years of establishment of diplomatic relations, the time has come for Nepal to show its strong solidarity with the genuine cause of Israel in the international forum 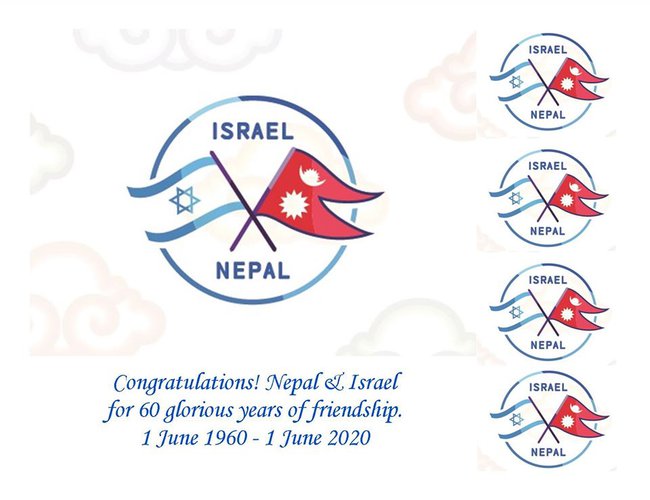 For the ambassador of Israel to Nepal Benny Omer, Nepal was in his mind since his early childhood. He took notice of Nepal when he saw the picture of Nepal’s first democratically elected Prime Minister B.P. Koirala shaking hand with Israel’s Prime Minister Ben-Gurion in 1960 in Israel.

After the establishment of diplomatic relations in 1960 on June 1, late Koirala paid a nine-day visit to Israel from August 12 on the invitation of Prime minister Ben-Gurion. Koirala also attended the International Conference on Science in the Advancement of New States. 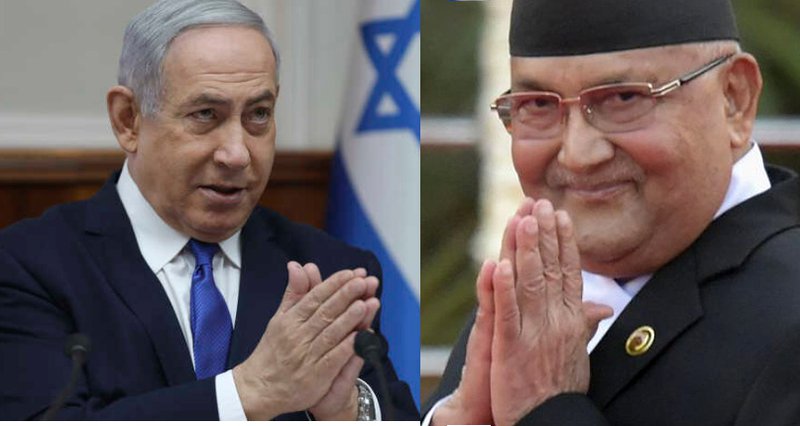 What a coincidence. As Nepal and Israel celebrated sixty years of establishment of the diplomatic relations on June 1, Benny Omar is serving ambassador of Israel to Nepal. Now, Nepal is no more a strange name in Nepal given the number of tourists visiting from Israel and growing interactions between two nations.

Exchanging the messages to mark the 60th anniversary of the establishment of diplomatic relations between the two countries, Prime Minister K P Sharma Oli held a telephone conversation with his Israeli counterpart Benjamin Netanyahu.

They exchanged greetings and best wishes on the occasion of the 60th anniversary of the establishment of diplomatic relations between Nepal and the State of Israel.

The two Prime Ministers expressed satisfaction on the state of bilateral relations that grew and consolidated in the past 60 years and agreed to further strengthen it in the future.

Sixty years is a long period of time in the life of individuals and the same with the state to state relations. Several governments, international and national contexts have already been changed during the last sixty years. From the cold war to the peace era and now the new context, the words exchanged by leaders of both the countries have not changed much.

When Koirala visited Israel, Nepal made efforts to diversify its relations at the global level and to share technology to develop Nepal. It was the darkest period of the cold war. Having no technical expertise, Nepal was in very poor states.

Thus, late Koirala expressed the hope that Israel using her unique experience could make available extremely valuable cooperation and assistance to Nepal, which was determined to telescope into one or two decades the economic development of the centuries.

Sixty years later, Nepal has achieved tremendous growth but Nepal still is far behind in technology. Thus, PM Oli repeated the same words. The two Prime Ministers talked about the highly developed technology that Israel has pioneered in many areas. Prime Minister Oli stressed the need for transfer of such technology in priority areas of Nepal such as agriculture and health.

The two leaders highlighted the importance of the increased level of engagements at bilateral and multilateral forums, people to people contacts and Nepal-Israel cooperation. They agreed on the exchange of high-level visits at an appropriate time for the expansion and deepening of bilateral cooperation.

As Nepal is the second country in Asia to establish diplomatic relations with Israel, people and the government of Israel always value Nepal’s early gesture of friendship. This is the reason Israel was among very few countries sending highly qualified medical teams to help Nepalese in the great earthquake of 2015.

Israel sent a military plane to Nepal with the necessary equipment to establish a temporary makeshift hospital and medical experts to treat victims.

Not only in the time of crisis like disasters, but Israel has also been providing support to Nepal in the modernization of the agriculture sector and the promotion of rural financial institutions. Since its establishment, the Small Farmer Development Project, a project of Agriculture Development Bank, continues to receive the expertise of Israel.

Thanks to the initiative of Hanan Goder, former ambassador of Israel to Nepal Sana Kisan Bikas Laghubitta Bittyasanstha Ltd (Small Farmer Development Microfinance Financial Institute Ltd, a successor of Small Farmers Development Project, has been a running Learn and Earn Program since 2014 sending over 550 young children of farmers each year.

Ambassador Goder in his tenure helped to bring Israel-Nepal relations in new height increasing people to people contact and linking Nepal with Israel. His project highest point of world and lowest point of the world linked Dead Sea and Mount Everest. 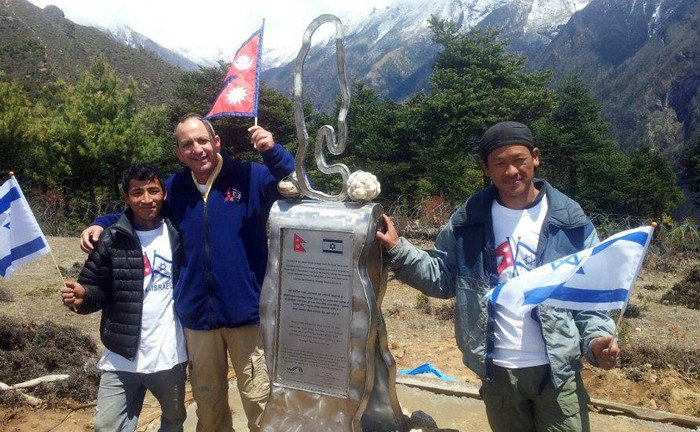 Ambassador Goder at base camp

Among much other importance, Nepal and Israel have one common thing that is to survive as an independent nation. Surrounded by inimical and hostile countries around, Israel has been safeguarding its independence averting frequent hostile actions. Keeping in that mind, Nepal’s political leadership decided to establish diplomatic relations with the State of Israel sixty years ago.

Israel is thriving globally as an economic powerhouse due to its innovation and high-class technology. Nepal also needs to grow economically if it wants to survive as an independent nation.

Foundation led by the first democratically elected prime minister late B.P. Koirala Nepal’s objective to establish diplomatic relations with the State of Israel was to show the solidarity with a small country and to recognize the legitimacy of Jews people to establish their right in their own land. Establishing diplomatic relations with Israel, Nepal firmly stands with the justice of Jews people to have independent State on their own land.

The courage showed by B.P. Koirala and later on King Mahendra in the early days recognizing Israel’s right to exist as independent nations have not lasted long. In the name of non-alignment, their predecessors have started to take the opposite side in international and UN forums.

Although Nepal has seen many political upheavals internally since then, all the governments firmly stand with Israel. However, Nepal’s international positions towards Israel in the international forum remain unfair and unjust given the words and commitments expressed informality.

Following non-alignment policy, Nepal overwhelmingly voted blindly against Israel in almost all United Nations resolution taking the side of Palestinian and Arab States.

In many cases, Nepal has options to remain neutral or absent in voting but it voted blankly against Israel. Out of over 60 resolutions in the UN against Israel, Nepal voted taking sides of Arab and Palestinian. This has not changed much from the early monarchy period to even now the republican era in Nepal.

Nepal’s policy some time contradicts its own stand as well. During the monarchical era, Nepal was one of the die heart supporters of Iran’s monarch and opposed the violence of radical Islam groups led by Khomeini. However, Nepal voted in favor of a resolution and tabled by the radical Iranian government against Israel.

Some slight shift is coming but Nepal’s policy still continues with its past. Although Nepal and Bhutan are members of non-alignment movement, Bhutan has in recent years absented in numbers of times in voting against Israel. However, Nepal voted against such resolution.

As Prime Minister Oli held a telephone conversation with his Israeli counterpart Netanyahu highlighted the importance of the increased level of engagements at bilateral and multilateral forums, people to people contacts and Nepal-Israel cooperation, how Nepal’s policy will be in future remain to be seen.

They also agreed on the exchange of high-level visits at an appropriate time for the expansion and deepening of bilateral cooperation.

Although Nepal has a greater interest in Arab as Arab countries employees’ large numbers of migrant Nepali, it is natural for Nepal to take a cautious approach. However, Nepal’s total interest does not serve blankly voting all the resolutions tabled by Arab, Israel and Islamic countries against Israel.

Though Arab countries have been sources of employment, Nepalese migrant workers have been receiving a meager amount of wages. Israel provides over 10,000 Nepali migrant workers as a caregiver and learns and earn program but the earning is much higher with legal protection of labor rights.

With cash in hand and technical skills, Nepali students returning from Israel has largely contributed to building Nepal’s economy by establishing modern agriculture farms. However, this is not with the returnee from Arab. Most of the returnee return with small savings without any skill enters into a vicious circle of poverty again.

As this is the sixty years of establishment of bilateral relations, the time has come for Nepal to show genuine solidarity to Israel in a genuinely international forum.

Late King Birendra aptly said about the importance of Nepal Israel relations. ” In Nepal, there is a great deal of admiration for the way Israel has struggled for her identity and sovereignty. Nepal’s decision to have relations with Israel was guided by a principled stand.” (Reads: King Birendra-As I Knew Him by Narendra Raj Pandey, former Press Secretary To King Birendra). 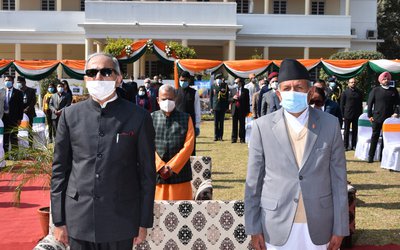 Biden Administration Wants To Partner With Nepal To Meet The Common Challenges By NEW SPOTLIGHT ONLINE 5 days, 4 hours ago

India Provides One Million Doses Of India Made COVID-19 Vaccine to Nepal By NEW SPOTLIGHT ONLINE 5 days, 5 hours ago