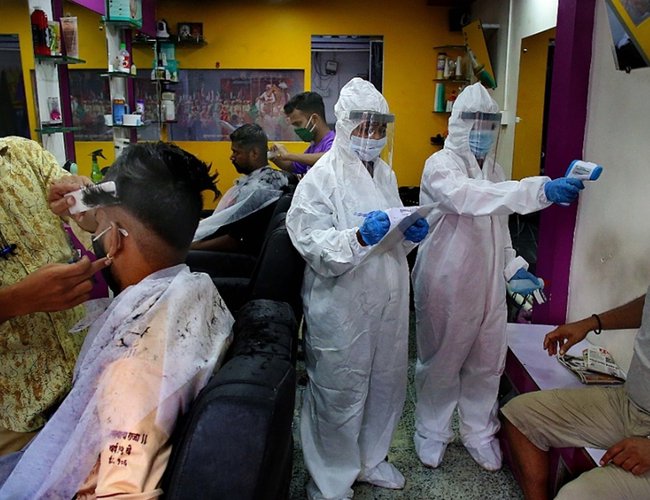 There are now over 20.4 million confirmed COVID-19 cases globally, with over 745,000 fatalities and more than 12.7 million recoveries, according to the latest tally from Johns Hopkins University.

As of Wednesday, the Chinese mainland has recorded 84,756 cases with 295 asymptomatic patients under medical observation. The death toll in stands at 4,704.

The U.S. has exceeded 5.1 million infections and recorded over 165,000 deaths – both totals are the highest of any country in the world.

Union Minister of State for AYUSH Shripad Y Naik Wednesday tested positive for the novel coronavirus. “I underwent Covid-19 test today and it has turned out asymptomatically positive. My vitals are within normal limits and I have opted for home isolation,” he said in a tweet.

Globally, over 20 million (20,223,306) people have been infected with the novel coronavirus, including 741,126 deaths. Amid race for an effective vaccine worldwide, Russia has approved a coronavirus vaccine for public use without the final phase of human trials. The vaccine, Sputnik V, has cleared regulatory approvals in record time, raising concerns over its safety and effectiveness. But, it is a long way from being available in India, if at all.

In a first of its kind case in Kapurthala district, a woman migrant from Bihar, who tested Covid- positive last week, delivered a Covid- negative baby girl Monday. The newborn’s test report came Wednesday. The woman’s family is Covid-19 positive too. The woman, in her 20s, has been kept in the isolation ward of the civil hospital and her child is being looked after by the hospital staff. “We immediately admitted her in the isolation ward when she tested positive and after taking several precautions we were able to do a safe and secure delivery of the child,” said Civil Surgeon Dr Jasmeet Bawa, adding that the test of the child was conducted and she was found negative.

The West Bengal government on Wednesday effected a change in the state-wide complete lockdowns in the state for the fifth time and decreased it by a day by withdrawing the slated one on August 28.

The decision to withdraw the complete lockdown on August 28 was taken after several communications were received citing difficulty to conduct business and banking operations because of two days' lockdown during Thursday (August 27) and Friday (August 28) in the last week of the month followed by the one-day lockdown on the following Monday (August 31), the order issued by chief secretary Rajiva Sinha said.

Complete lockdowns were to be held on the three dates as per the earlier decision of the government, PTI reported.

Statewide complete lockdown will now be observed on four days for the rest of this month instead of five days as announced earlier.

The Covid-19 fatality rate in Punjab continues to rise consistently, with the state reporting the highest number of deaths (32) in a day on Tuesday since the outbreak. Punjab is at no. 5 among all states in terms of percentage of COVID deaths with a 2.5 per cent fatality rate.

As of Tuesday, the only other states having a higher Covid fatality rate than Punjab were Gujarat (4 per cent), and Maharashtra, Delhi and Madhya Pradesh (3 per cent each).

The national average Covid fatality rate was 2 per cent as of Tuesday.

Peruvian President Martín Vizcarra on Wednesday banned family gatherings and extended lockdowns to five more regions of the country amid a fresh spike in cases. In recent days, the Andean country has registered a daily average of 7,000 confirmed infections and 200 deaths, according to official data.

Italy on Wednesday ordered travelers arriving from four countries – Croatia, Greece, Malta and Spain – to be tested for COVID-19 and added Colombia to a list of countries under a complete travel ban amid growing concern over new infections.

Trutnev's trip to the Far East as part of the visit of Russian Prime Minister Mikhail Mishustin has been postponed, according to the assistant.

The first batch of a COVID-19 vaccine developed by Russia's Gamaleya Research Institute will be produced and ready for use in two weeks.

Britain's economy shrank by a record 20.4 percent between April and June, when the coronavirus lockdown was tightest, the largest contraction reported by any major economy so far, with a wave of job losses set to hit later in 2020, official figures showed on Wednesday.

U.S. President Donald Trump is repeating his call for the nation's schools to reopen, and has again pressed Congress to steer future coronavirus funding away from schools that stay closed this fall.

Trump made the remarks on Wednesday at a White House discussion with parents, teachers and doctors who said they support a full return to the classroom.

Also joining Trump were Education Secretary Betsy DeVos and Vice President Mike Pence, who said the health risks tied to keeping children at home are greater than those associated with the coronavirus.

Speaking at a White House briefing earlier on Wednesday, Trump released eight recommendations for reopening U.S. schools, including that masks be used when social distancing is not possible.

The novel coronavirus has been found on the surface of frozen chicken wings imported from Brazil in a recent inspection of cold-chain foods and practitioners.

No Need For Kids To Be Vaccinated To Attend School: WHO
Aug 05, 2021
CPN(UML) Nepal Faction Divides Over Joining The Government
Aug 05, 2021
China Secured Highest Gold, US Leading Over Total Medal Tally And India Secured Silver
Aug 05, 2021
Allow All Countries To Vaccinate 10% Population: WHO
Aug 04, 2021
I Might Join Politics: Paras Khadka
Aug 04, 2021