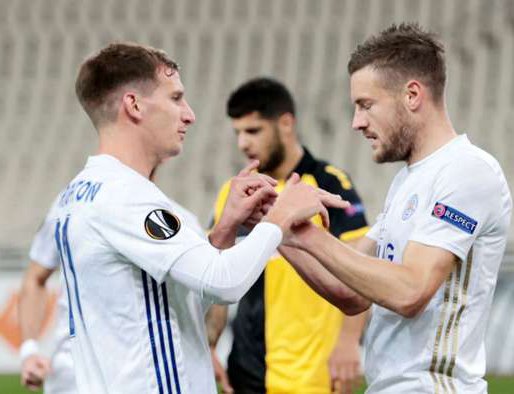 Vardy put Leicester ahead from the penalty spot with his 11th goal from his last 12 appearances in all competitions.

Hamza Choudhury put the Foxes two up before the interval with a crisp finish before Muamer Tankovic got one back early in the second half.Goal

However, AEK were unable to muster an equaliser as Leicester chalked up only their third ever away victory in Europe.

Leicester were awarded a penalty when Vardy went to ground following a touch by AEK goalkeeper Panagiotis Tsintotas after being put through by James Maddison.

Tsintotas almost made amends when he got a hand to Vardy's spot-kick after he guessed correctly and dived to his right, but the ferocity of the strike saw it squeeze over the line.

The alert Tsintotas then made a smart save at his near post shortly afterwards to deny Cengiz Under a goal on his first start for the Foxes.

Brendan Rodgers' side were almost punished for some sloppy play at the back as first Kasper Schmeichel saved from Marko Livaja's header and then moments later the Croatian striker dragged a shot wide.

However, the Foxes added a second shortly before half-time when AEK allowed a Maddison corner to bounce in the box and the unmarked Choudhury adjusted his body at the back post to stylishly whip the ball home.

AEK pulled one back three minutes into the second half with a goal of equal quality through substitute Tankovic, who beat the Leicester offside trap and struck a low first-time shot beyond Schmeichel.

Tankovic found himself in a similar position a couple of minutes later but this time he sent his effort over the crossbar leaving Schmeichel furious with his defence.

His words had an impact as Leicester tightened up from that point and saw out the rest of the contest without further trouble.

What does it mean? Maiden away-day success for Foxes

The win was Leicester's first away from home in the Europa League having lost the away legs of first-round ties against Atletico Madrid in 1997 and Red Star Belgrade in 2000 when the competition was known as the UEFA Cup.

After back-to-back victories in their first two games, Rodgers' side have laid the foundations to qualify for the knockout phase of the competition and are level with Braga on six points and an equal goal difference.

Vardy has both won (four) and scored (five) more penalties in all competitions than any other player for a side in the top-five European leagues this season.

He was once again a key player, stretching the AEK defence with his runs in behind, and his goal ensured the 33-year-old has now scored in every competition in which he has played for Leicester.

Experienced Iranian striker Karim Ansarifard led the line for AEK but was unable to cause the Leicester defence any problems.

After a meek first-half showing in which he managed just 15 touches and no shots on goal he was hauled off by AEK head coach Massimo Carrera.