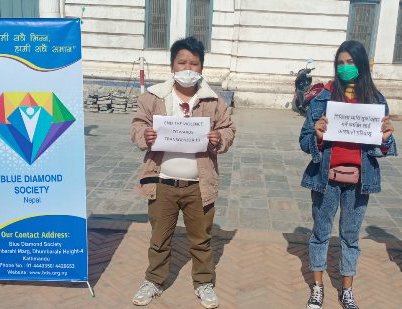 The Blue Diamond Society organised a silent protest at Basantapur Durbar Square on Friday to mark the Transgender Day of Remembrance. They also demanded action against the ones harassing Nikisha Shrestha reports The Rising Nepal.

On November 17, social media was awash with the people outraged by a video which had gone viral. The video in question showed Nikisha Shrestha, a transwoman, being harassed by two boys on a scooter while walking along the road in Ward No. 1 of Bhaktapur Municipality reports the daily.

"In Nikisha's case, two are said to be less than 18 years. With children harassing others in such a way, we sure have many drawbacks in bringing up our new generations. People from LGBTIQ community are still neglected, most marginalized, least visible but highly discriminated," said Manisha Dhakal, executive director at Blue Diamond Society, an LGBTIQ rights organisation in Nepal.

"Despite the rights bestowed upon the LGBTIQ in the constitution, violence and harassment continue to be the part and parcel of our daily lives," deplored Dhakal. "We hope we are acknowledged by the people as well and be treated like one among themselves."

Only 10 Percent Of Results Remains In Local Level Polls By Agencies 18 hours, 56 minutes ago