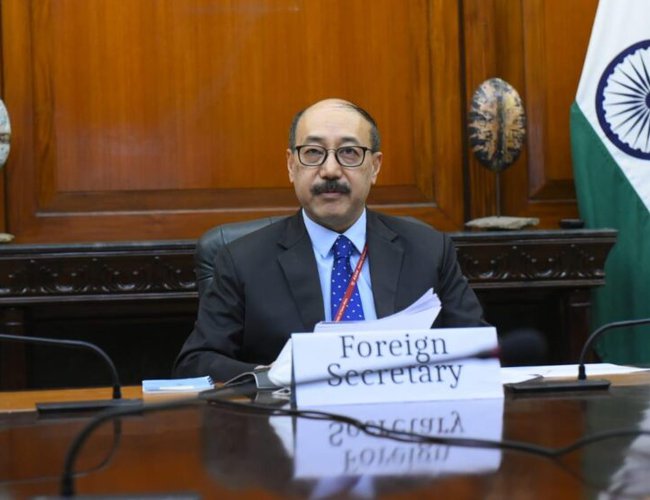 As two other senior officials from India, Indian Foreign Secretary Harsh Vardhan Shringla is paying an official visit to Nepal giving importance to India’s historical and civilization linkages and connections with Nepal.

Foreign Secretary of India Harsh Vardhan Shringla’s is scheduled to visit Nepal on 26-27 November 2020. This will be the first visit of the Foreign Secretary to Nepal after he assumed office.

Born and grown up in Kalingpong and Darjeeling of West Bengal, Indian Foreign Secretary Harsh Vardhan Shringla knows the core values of the two countries. He can make a difference in reconnecting civilizational, cultural and religious relations between the two countries.

Showing India’s highly important civilizational, religious, cultural and historical connection with Nepal, Indian Army Chief General Manoj Mukund Naravane started his visit by offering prayers at Pashupatinath Temple. In his visit, he spent most of the time to enhance and strengthen relations with its traditional ally Nepal Army and to visit places of religious, cultural and civilization importance.

As per the agreement, Nepal has made many changes, including declaring Nepal as a republican, federal and secular state, promulgating a new constitution, laws and regulations and unbundling Nepal’s religious, cultural and core civilization.

Along with removing monarchy, the Hindu Kingdom was also removed completely creating new state structures and removing the fundamentals of Nepal’s common civilization.

With major political parties and its leader concentrating their efforts on power politics, Nepal’s historical, cultural and civilizational linkages have been badly shaken. With no faith in religion, Nepalese political leaders even misinterpreted the visit of Indian Prime Minister Narendra Modi to Pashupatinath -- his personal visit and worship were interpreted differently.

Instead of ushering new era for Nepal and India, the incidents that occurred after the promulgation of the new constitution have not only closed Nepal’s chapter with the monarchy and Hindu religion but also broken its traditional and friendly relations with India.

National elections and formation of the government by the Nepal Communist Party under the leadership of K,P. Sharma Oli has changed nothing to drastically improve bilateral relations between the two countries.

As the erosion of Nepal’s civilization connection with India continues, problems surfaced. The culmination of that point was the publication of a new map by Nepal.

Harping nationalist slogans in each and every issue, Nepal’s political leaders have been mostly dismantling the bonds of relations between Nepal and India politicizing all the important aspects.

With so many connecting factors with India, including shared civilization, religion, culture, history and geography, Nepal cannot ignore the deep-rooted relations with India. For a long, India also ignores this reality that existed between the two countries. Bound so intricately with India, Nepal has very limited space in handling the relations with other countries.

However, Nepalese leaders are always underestimating them. Nepal often uses its relations with China to counterbalance India’s deep-rooted relations. Just a day after the visit of Indian Army Chief, Prime Minister KP Sharma Oli carried out an onsite visit of Kimathanka checkpoint and North-South highway. North-South Koshi highway is an important road of the country to connect China, India and Nepal,” said PM Oli.

Knowing PM Oli’s mind on the relations with India, his advisors and advisors too are yet to work to reconnect the relations. Gopal Khanal, the Consultant Editor of Government-owned The Rising Nepal, writes “this situation is not the outcome of Prime Minister Oli's diplomacy of pleasing India, but a result of India's need to maintain friendly relations with Nepal.

“Some are hell-bent on discrediting Oli's nationalism and patriotism through fabricated news and narratives. But, such attempts have gone down the tube time and again. It is unlikely that they will succeed in the future, too. Many political analysts have nurtured their flawed views that India will never hold talks with Prime Minister Oli on the disputed boundary and will instead take tough measures like that of the blockade but they have proved themselves wrong.”

“Prime Minister Oli's resolute stand on the boundary issue with neighboring India and the latter's realization has of a late created a positive atmosphere for holding a formal bilateral meeting with it focusing on the substantial agenda. India launched cartographic aggression by incorporating Nepal’s Limpiyadhura, Kalapani and Lipulek in its map. Nepal responded to it with 'tit for tat' diplomacy, forcing Indians to come to the negotiating table after months of verbal blame games.”

Even PM Oli’s other advisors hold the same view as Khanal gave their endorsement of the publication of the article.

Unlike other countries, Nepal and India have peculiarly different narratives based on tradition, culture, religion and civilization. As Krishna said I am mighty as Himalaya and pure as Ganga.

Surrounded by the Himalayas, which are the major sources of water of the Gangas, Nepal is the source of water which purifies not only people but also vast areas of land in the south.

Nepal and India have certain unique types of relations. Exchange of the Honorary General title of the armies by chiefs of both the armies of Nepal and India is one example. As Himalayas and Ganga rivers spiritually and religiously unite Nepal and India, our common civilization shows our destiny.

Along with others, General Naravane, a Hindu, preferred visiting Pashupatinath, a highly sacred temple of Hindus all over the world. However, the leaders of the communist government did not show any gesture allowing him inside the temple to perform the puja.

As the Pashupatinath Temple has been closed only to avoid crowded, nothing can prevent them to allow highly important dignitaries from India to go inside. It is the personal right of every Hindu to pay respect to Pashupatinath and General Naravane is not an exception.

As Prime Minister Oli has shown his public posture of a kind, he came with a different posture informal meetings at his residence.

Prime Minister Oli told the General that there was a good friendship between Nepal and India and that the issues between the two countries would be resolved through dialogue.

Dr. Rajan Bhattarai, Foreign Affairs Advisor to Prime Minister Oli, said that there is a tradition of conferring the honorary rank of General on the Army Chiefs of the two countries.

After months of jingoism, Oli attempted to mend fences with a call to Prime Minister Modi on the eve of Independence Day. "We look forward to further strengthening of India Nepal ties, based on our shared culture and history," wrote Indian PM Narendra Modi responding to PM Oli.

That was followed by a meeting between Nepal’s foreign secretary and India’s ambassador to Nepal to review the progress of India-aided projects in that country.

As a Hindu King, Nepal’s monarch also maintains Nepal’s linkage with the spiritual sites of India. Despite signing international conventions, the monarch used to send a Musk to Jaganathpuri annually to maintain the spiritual sanctity of temples. Similarly, India continues to supply sandalwood to Pashupati Temple to perform the puja.

Although secular India continues to maintain its obligation towards Nepalese Hindu temples, secular Nepal has discontinued its traditions needed to give continuity to retain civilizational continuity.

At a time when India has started to give priority to its civilizational, cultural and religious connectivity to Nepal, the two countries’ relations are also likely to change.

As American Professor late Leo Rose in his book Nepal Profile of the Himalayan Kingdom said, a perception held by a small group of elites cannot change the culture, religion and value penetrated deep inside at the root. He argued that cultural and value-related phenomenon existing below the elite level is highly significant to determine Nepal’s relations with India.

Excited To Be In Beautiful Nepal: Under Secretary Uzra Zeya By NEW SPOTLIGHT ONLINE 1 day, 18 hours ago