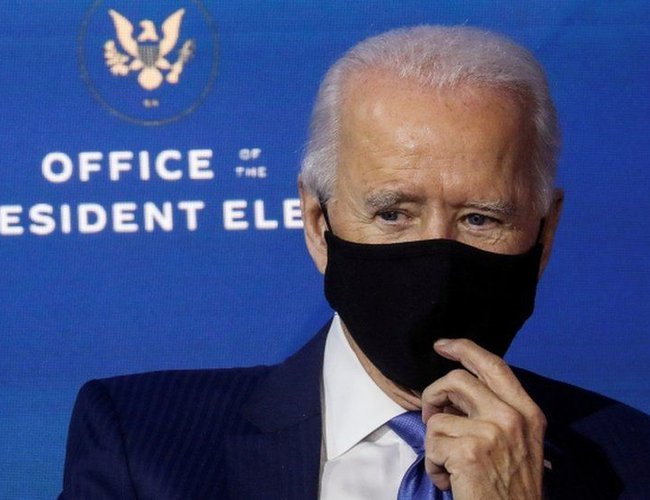 For a third time, Joe Biden has been declared the winner of Georgia's presidential election.

A final tally announced by Secretary of State Brad Raffensperger showed that Mr Biden won the normally Republican stronghold by under 12,000 votes.

The state carried out a second recount of the 3 November vote following challenges from President Trump's team.

Mr Raffensperger, a Republican, warned that debunked claims about voting fraud were "hurting our state".

President Trump continues to refuse to accept defeat in the vote, alleging, without evidence, there has been widespread fraud.

"We have now counted legally cast ballots three times, and the results remain unchanged," Mr Raffensperger said at a news conference from Atlanta on Monday.

"I know there are people that are convinced the election was fraught with problems, but the evidence, the actual evidence, the facts tell us a different story," he continued.

Mr Trump has failed to make significant headway in his legal challenges to the vote, which have been issued in several battleground states.

The third declaration of Mr Biden's victory comes two days after Mr Trump travelled to the state to hold a rally for Republican senate candidates, but spent much of his visit attacking the state's governor for not doing more to aid his legal challenges.

On Monday, federal judges in Georgia and Michigan dismissed more lawsuits brought by the Trump campaign.

The lawsuit in Georgia, which was brought by Trump ally Sidney Powell, had been dubbed the "Kraken" lawsuit after the former-Trump campaign lawyer threatened to release the mythical sea monster on the state's electoral system.

What is the 'Kraken' conspiracy?

But Mr Raffensperger said "the claims in the Kraken lawsuit prove to be as mythological as the creature for which they're named.

"Georgians can now move forward knowing that their votes, and only their legal votes, were counted accurately, fairly, and reliably."

Georgia's announcement comes one day before the deadline for Congress to give its official seal of approval to results already certified by each state.

The date, known as Safe Harbor Day, effectively makes it much harder for members of congress to later challenge the results submitted by each state.

Mr Biden won the presidential election with 306 votes in the electoral college - the system the US uses to elect a president - to Mr Trump's 232. The college will meet on 14 December to formalise the outcome