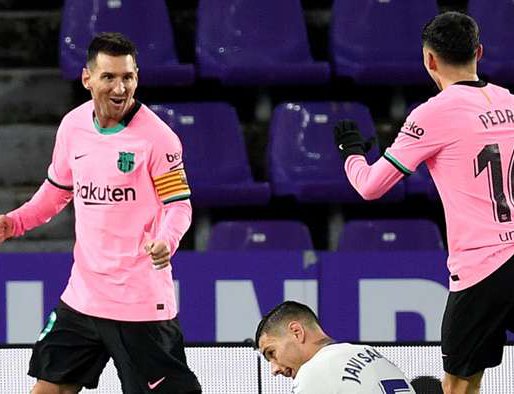 Lionel Messi has broken Pele's all-time record for goals scored with a single club by netting his 644th career goal for Barcelona. Goal

The Brazilian icon netted 643 times for Santos in his career, a mark that seemed to be nearly unbreakable - but Messi has now set the record by scoring in the 65th minute of Barca's La Liga match against Valladolid on Tuesday.

With Barca already up by two goals, Pedri sent Messi in behind the defence with a backheel pass and the 33-year-old slotted home past Jordi Masip to make it 3-0 on the night.

Messi had tied Pele's record at the weekend when he scored in Barcelona's 2-2 draw against Valencia.

After Tuesday's game, which ended 3-0, Messi took to Instagram to express his gratitude to those who helped him reach Pele's record.

"When I started playing football I never thought I'd break any record, especially not the one I achieved today that Pele held," Messi wrote.

"I can only give my thanks to everyone who helped me during these years, my team-mates, my family, my friends, and everyone who supports me every day."

It is yet another record for Messi, who has established himself as one of the greatest footballers of all-time since he joined Barcelona at age 13 and made his competitive debut at 17 in 2004.

Messi has gone on to win La Liga on 10 occasions with the Blaugrana, as well as six Copa del Rey titles and four Champions League trophies.

On an individual level, Messi has won the Ballon d'Or six times, most recently in 2019, the most any player has ever won the award.

Recently, though, Messi's time at Barcelona has soured as he attempted to engineer a move away from the club earlier this year.

In an interview with Goal in September, Messi revealed that he would not attempt to activate his release clause in order to avoid any legal dispute with Barca, but with his contract set to expire at the end of the current season, there is a very real possibility that Messi could be entering his final months at Camp Nou.

Though there have been rumours of interest from the likes of Manchester City and PSG, Goal has reported that the Argentine superstar has yet to be contacted by any other club.

Messi will be free to speak with interested parties from outside of Spain in January.