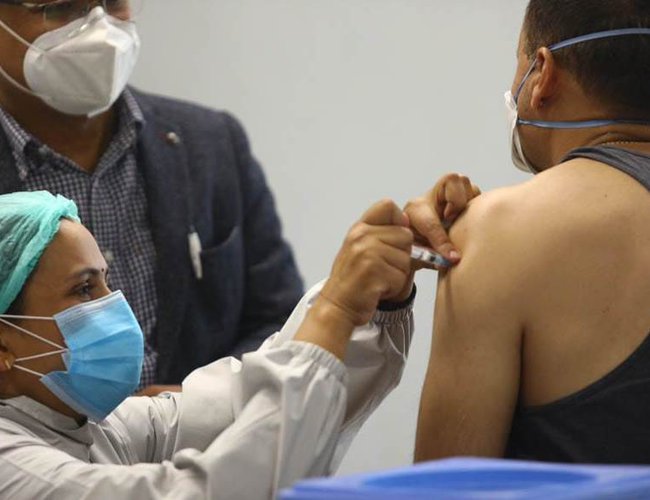 The government is to administer the second dose of vaccine against COVID-19 to people, who have received the first dose, from April 20 to 28 reports RSS.

Associate Spokesperson at the Ministry of Health and Population, Dr Samir Kumar Adhikari shared this information in a discussion program titled 'The science of COVID-19 Vaccine and Vaccination Campaign in Nepal', organised by the Ministry here today.

According to Nepal’s national news agency, the first dose of the Covishield vaccine was given to the health workers, security personnel and journalists working in the frontline as well as the staff of the diplomatic missions from January 27 to February 12.

Around 429 thousand persons received the first dose of the vaccine, which comprises 1.4 per cent of the total population.

Meanwhile, one million out of the two million doses of the Covishield vaccine produced by Serum Institute Company of India and purchased by Nepal has already arrived. The one million doses vaccine is to be administered to people above 55 years from March 7.

The Health Ministry associate spokesperson also said that the 13 million doses of vaccine are also arriving under the COVAX mechanism. He expressed the confidence that COVID-19 would also be controlled with the help of the vaccine just like measles-Rubella, smallpox, Japanese Encephalitis was eradicated through a vaccination campaign before this.

National Professional Officer of the World Health Organization (WHO), Nepal, Dr Rahul Pradhan said the Covishield vaccine was effective and appropriate as 58 countries including Nepal have used it. He added that 227.6 million people have been administered this vaccine throughout the world.

He made it clear that there were no side effects from the Covishield vaccine even in those people with serious medical conditions.

According to him, each dollar spent on the vaccine is refunded by 42 dollars.