There Is No Way Other Than Elections: PM Oli

There Is No Way Other Than Elections: PM Oli 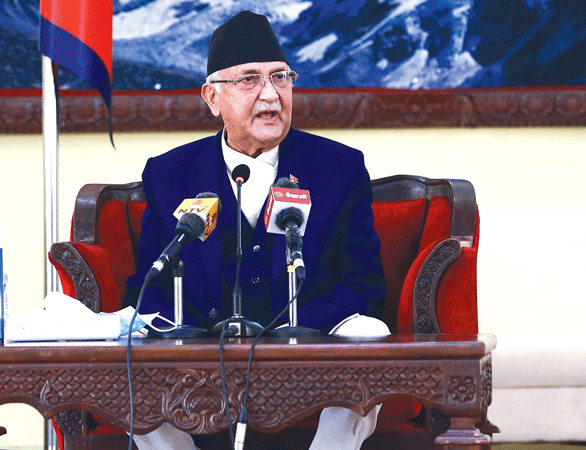 Prime Minister KP Sharma Oli has clarified that he had paved the way for the formation of another government in accordance with Article 76 (5) of the Constitution, as there was not much time to present policies, programmes and budget.

He made this clear at a press conference held at the Prime Minister’s official residence in Baluwatar on Friday.

Stating that there was a wrong interpretation of the President’s call for the formation of a new government, he claimed that he had suddenly made the recommendation to the President, which came as a surprise for many.

He said, “Completing the ritual of taking the vote of confidence would only waste time. As it is unavoidable, we have tried to move forward as per 76 (5) due to the pressure of time. ”

A cabinet meeting decided to call for the formation of an alternative government.

“I have realised that the only intention of others was to oust me from the post, so I have decided to pave the way for forming an alternative government,” he clarified.

Discussing that one day is enough time for the parties to come together, Prime Minister Oli said that he would welcome the formation of an alternative government. “We will play a supportive role by remaining in the opposition,” he said.

Efforts were being made to destabilise the country for the last one year, said Prime Minister Oli, adding that the government had not

been able to function properly due to the unhealthy game of the opposition.

“Instead of standing together to tackle this pandemic, the government was kept busy in other issues, he said, adding, “Earlier, I had taken an initiative for a new mandate by dissolving the parliament, but I could not succeed.”

He emphasised that the party leaders have shown a tendency of not allowing the House of Representatives as well as the government to function effectively.

Prime Minister Oli added, “If an alternative government cannot be formed at the time of COVID-19 pandemic, I asked them to support me, but they played a dirty game.”

He said, “Some have raised their voice for the president’s impeachment. The dignity of the presidency is being tarnished. The President will do what the prime minister recommends. Let’s not insult the President.”

In response to a query from a journalist, Prime Minister Oli said that the group-led by Madhav Kumar Nepal had worked to sabotage the system. Crossing the floor in the parliamentary system was immoral and criminal, he added.

Talking about the defeat of the party’s official candidate leader Ram Bahadur Thapa ‘Badal’ in the National Assembly by-election, he remarked that the Nepal’s group had acted very immorally.

“The party cannot function in absence of discipline,” he added. Minister for Foreign Affairs Pradeep Kumar Gyawali said that KP Sharma Oli had been re-appointed as the Prime Minister in accordance with the Constitution after the opposition parties failed to get a majority.

POLITICS Consensus To Contentions By A Correspondent 5 days, 11 hours ago