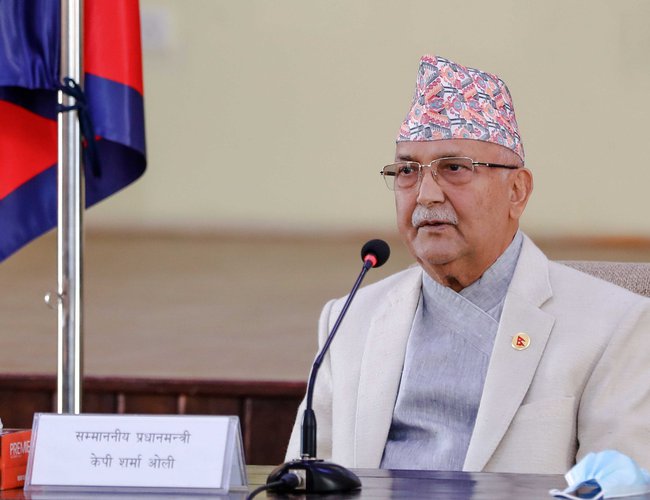 Prime Minister KP Sharma Oli has said that the efforts are continuing at different levels and channels to get vaccines from different countries to inoculate all eligible Nepali citizens.

We have made approaches to the UN, WHO, World Bank and different diplomatic mission representatives and we have received positive response and assurances, the Prime Minister said.

I now urge the international community to provide us vaccines against COVID-19 as we still need around 37.5 million doses of vaccines for (two dose) inoculation purpose, the Prime Minister said during an interaction with the representatives of international media at Baluwatar on Thursday.

We have made requests to the USA, Russia and Britain to help us by providing vaccines and the response is very positive. Request is being made with India in this regard at the higher level, PM Oli said.

The United States of America has been requested to provide us Johnson and Johnson vaccine which can be stored in normal temperatures and administration of a single dose is enough.

Nepal’s friendly countries and neighbours are being requested for the crucial vaccines and I think we will be able to vaccinate all the eligible citizens before the election, the Prime Minister said.

He added that infections and fatalities are in downward trend very recently giving hope that the situation will improve though the nation is not free from the risk of the pandemic.

Prime Minister Oli stressed that periodic elections cannot be stopped due to the pandemic because elections have no alternative. “We will vaccinate our people and the present situation will certainly change for better.”

The election has been announced and it will be conducted. This is not an announcement not to conduct the election as some people have alleged. The rumour that the poll will not happen has no basis, the PM said.

The Prime Minister assured that the election will be fair and said that credible international agencies will be invited to observe it.

In response to a query about the possibility of declaring a state of health emergency, Prime Minister Oli said that such a situation will not come out of will but may be necessitated by circumstance. If such a situation is declared, it will be for purely for health related purpose and consideration will be made to cause minimum inconvenience to the people.

The Prime Minister said that he was not working for the sake of boosting his personal image but for the good of the nation and the people. “I have been working for good results of the work, it is not for enhancing personal image”, he said.

“Just make a comparison of the achievements the nation made in past 30 years and what this government has achieved in three years. You will see the difference. But I have not done this for personal gains and image boost,” he said.