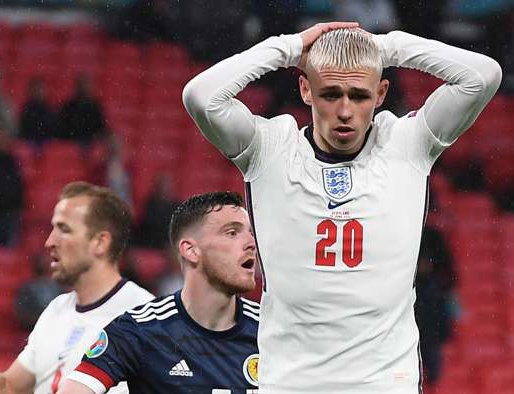 The Three Lions' lack of cutting edge has become a cause for concern, with their striker becoming an anonymous figure

Harry Kane completed just two passes, had one shot off target and just 10 touches of the ball in a first half that summed up England's weak display during a 0-0 draw with Scotland at Euro 2020.

The England captain was largely expected to be his side's talisman, but he hasn't been able to muster a shot on target. He was subbed off for Marcus Rashford in the 74th minute on Friday, and in the end, his 19 touches of the ball were the fewest he has ever had in an international match for England where he has played more than 45 minutes.

His sudden dip in form at a major tournament is a cause for concern for the leader and focal point of the Three Lions, who have so much attacking talent but have yet to deliver a cohesive product.

"I think it was just a tough game," Kane told ITV. "They defended really well, made great blocks at the right time, and that's football. It's the Euros, no game is going to be easy. They're playing for their lives and we saw that today."

Perhaps Kane is still feeling the toll of injuries sustained during his club season at Tottenham, but it must be said that some of his problems also stem from how he is being used, with his team-mates and manager not helping the cause.

Manchester City duo Raheem Sterling and Phil Foden have started both games and look like players who haven't been used to playing with a classic No. 9. Cutting inside and creating chances for themselves, they are not the natural crossers of the ball Kane likes to feed upon. Kane has of course looked so much better when playing alongside Son Hueng-min with Spurs.

Scotland had no threats to their wing-backs, meanwhile, with Gareth Southgate's full-backs not overlapping often enough, having also been conservative against Croatia. That hindered Kane, too, but also put England's defence on the back foot at times when Andy Robertson was able to sprint at them with the ball.

"We're still working those [passing] patterns, we're playing a high level of games under the intensity and to find space tonight was difficult," Southgate said to ITV. "Scotland played well and we weren't able to open them up.

"The whole team can look at ourselves, that starts with me, we've got to be better. We didn't do enough to win the game tonight, not enough attempts on goal, we have to go away and look at that."

With his club, Kane almost never goes through any bad patches, netting goals and notching assists even when the North Londoners are in crisis. That's what helped him end the season as the league's Golden Boot winner and earned him the Premier League's playmaker award for most assists.

He also won the Golden Boot at the last World Cup and he was the overall top scorer in qualifying for this tournament with 12 goals. With Chelsea, Man City and Man United interested in signing him this summer, there's no doubting his quality.

Ultimately, Rashford didn't have time to impact the game from the bench, while the clamour to see Aston Villa's Jack Grealish come off the bench Scotland didn't produce the results many would have hoped. Beyond them, Dortmund's Jadon Sancho and Everton's Dominic Calvert-Lewin went unused, showing just what an embarrassment of riches England had over their local rivals.

Southgate has a lot of talent in his squad, but his men have begun the tournament stagnant in possession, lacking fluidity between their forwards and it is hurting the star player Kane.

Still, there's time to overcome it with four points almost certainly enough to see them in the last 16 of the European Championship.