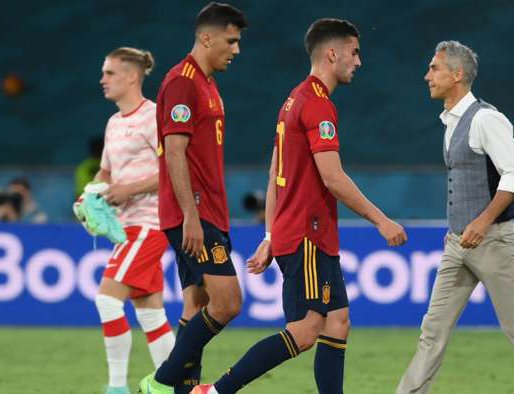 Spain suffered a second successive blow to their ambitions of a sparkling Euro 2020 run after Robert Lewandowski rescued a point for a gutsy Poland at La Cartuja in Group E.

Alvaro Morata's early opener looked to have put Luis Enrique's side in the driving seat for a first win of the tournament, five days after they were held to a goalless draw by Sweden in their opening game.

Yet a second-half spot-kick for Paulo Sousa's side meant that La Roja were held to consecutive stalemates on home turf despite vastly superior possession once more, leaving their final group-stage clash with Slovakia as a "must-win" encounter to reach the knockout rounds, per defender Pau Torres.

“It’s not the result we wanted," the Villarreal centre-back admitted to Telecinco at full-time. "We always do our utmost to win. In the next game, we’re going to do the same in order to get a result.

"We have to win on Wednesday to stay in the tournament. We need to believe in ourselves."

Torres's Villarreal team-mate Gerard Moreno spurned a chance to deliver a possible matchwinner after his penalty hit the post mere minutes after Lewandowski tied things up, but the defender was quick to rally around the forward.

"Gerard hadn’t missed a penalty all season, I believe in him to score them," he added. "The message is to keep believing in ourselves. We’re going to give our all to be in the next round.”

The sense of a lost opportunity hung like a spectre over Spain's unsuccessful efforts to break Poland down across the final half-hour.

Manchester City midfielder Rodri acknowledged that La Roja cannot expect to have easy opponents every step of the way, but admitted that their struggles to finish opportunities fed into a lack of sure-footed confidence at points throughout the game.

“We’re very frustrated," he added. "The ball didn’t want to go in. You’re never going to have an easy opponent in these tournaments.

"We had our chances but you start doubting more when the ball won’t go in. The pitch isn’t in the best state but that isn’t an excuse.

"The word is frustration. No game is easy. I hope people stay with us right until the end because we need that. It’s not the time to give in or to criticise. It depends on us now.”

Spain head to their final game with Slovakia knowing that victory will be enough to secure them a top-two berth, regardless of the result between Poland and Sweden in Saint Petersburg.

CAN Lifts Suspension Of Leg-spinner Lamichhane By NEW SPOTLIGHT ONLINE 2 days, 5 hours ago