Roberto Mancini's side were second-best against La Roja in Tuesday's semi-final, but their shootout win suggests they may well be unstoppable 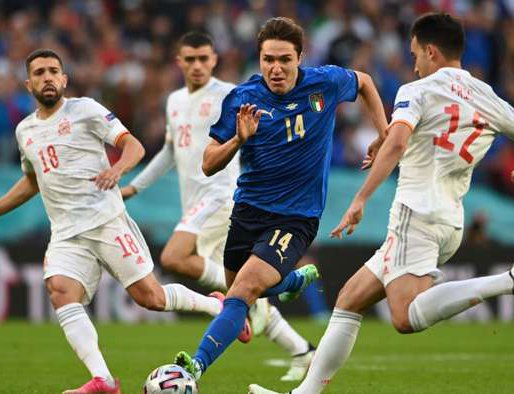 From the first night of Euro 2020, Italy have looked the team to beat at this tournament.

And though they had to ride their luck at times against Spain in Tuesday's semi-final, the Azzurri will be there on the final night of the competition too, their unbeaten run stretched to 33 games and still looking a formidable unit.

Roberto Mancini's side were not at their best at Wembley Stadium, but the belief and team spirit that the ex-Manchester City manager has instilled in his squad has carried them to within reach of just their second European Championship title. 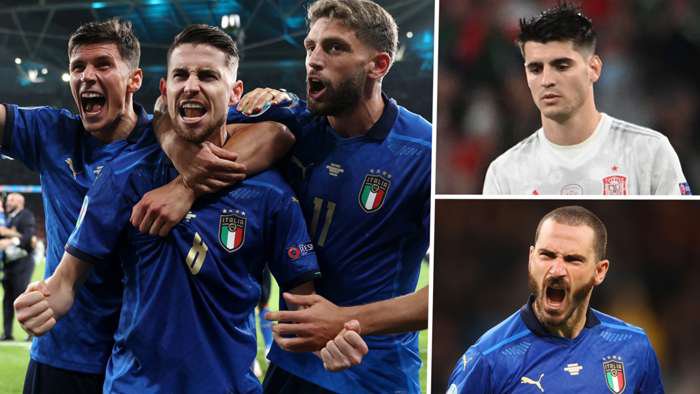 Whether it is Denmark or England who face them back under the arch on Sunday, they will have a major test on their hands in ending the Italian fairy tale.

Gianluigi Donnarumma proved to be the hero against Spain, saving Alvaro Morata's penalty in the shootout before Jorginho showed his usual coolness from the spot to nestle the winning effort into the bottom corner past a forlorn Unai Simon.

That calmness defied a performance from Italy that showed none of the control that has impressed many onlookers in the previous rounds.

Somewhat surprised by Spain's decision not to play an out-and-and striker and instead deploy Dani Olmo as a false nine, they allowed their opponents to keep possession for long stretches, rather than use the high-pressing tactics that brought them so much joy against Belgium in the quarter-finals.

Perhaps that was because they were confident that Spain, who have dominated the ball in every game they have played at Euro 2020, are also one of the most profligate sides on the continent, and as such were unlikely to hurt Italy too much in the final third.

If that was Italy's belief, then for 80 minutes it worked to perfection.

Olmo and Mikel Oyarzabal both fluffed their lines when well placed in the box, with the superb work of Pedri and Sergio Busquets in midfield looking like it would be for nought after Federico Chiesa had struck midway through the second half.

Whether it was in the Champions League, Serie A or Coppa Italia, Chiesa has shown over the course of his first season at Juventus that he is a big-game player, and that ability to not let the occasion be too much for him was on show again on Tuesday.

His superb curled finish following a swift Italy counterattack was celebrated wildly by the 11,000 or so Italy fans inside Wembley, who slightly outnumbered their Spanish counterparts as both contributed to a superb atmosphere in the English capital. 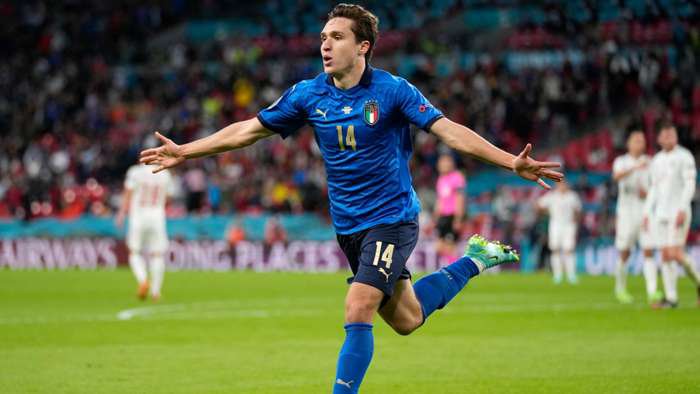 It was those supporting La Roja who were celebrating as the game entered its final 10 minutes, though, as Morata - who had been sprung from the bench in the immediate aftermath of Chiesa's goal - traded passes with Olmo before slotting home with a finish that sent Donnarumma the wrong way.

Only four players have ever scored more European Championship finals goals than Morata's six in the history of the competition, while previously only Cristiano Ronaldo had scored three or more goals at more than one Euros tournament.

It was hard not to feel some happiness for Morata, who has had criticism follow him around despite having enjoyed an elite career at the very highest level, and who received death threats from unhappy supporters earlier in the competition.

One must hope that he avoids such abhorrent abuse in the days that follow this game, with his penalty miss likely to see him painted as the Spanish villain.

Olmo also missed his spot kick, but the narrative surrounding Morata meant it felt almost inevitable that he would finish the night as the fallen hero, even before he had begun his run-up to take Spain's fourth effort of the shootout.

And so it is Italy who march on, and few would bet against them going all the way now. There is an inevitability about this version of the Azzurri. Whether they play well or not, they always seem to find a way to win.