'It's My Back Garden, I'm Scoring!' - Wembley Waits For Sterling To Crown Euro 2020 Glory

'It's My Back Garden, I'm Scoring!' - Wembley Waits For Sterling To Crown Euro 2020 Glory 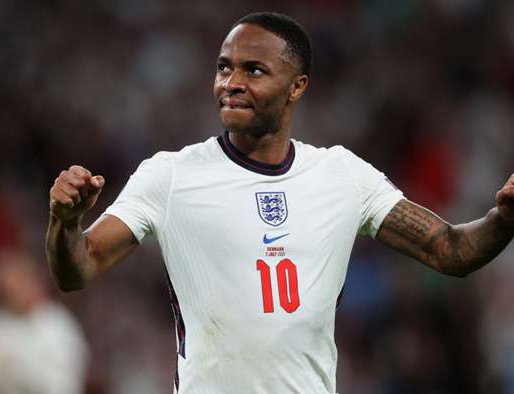 The Manchester City forward, brought up in the shadow of the national stadium, has led England to the brink of a first trophy in 55 years

“I’ve become a legend at football,” an 11-year-old Raheem Sterling wrote in his yearbook before leaving Oakington Manor Primary School, less than a half mile to the south of Wembley Stadium.

His prophetic words have come true. The ‘Boy from Brent’ is leading England to their first major tournament final in 55 years.

The cheers Sterling could hear from the stadium as a child, playing football in the shadow of the Wembley arch, are now aimed at him.

There’s still 90 minutes to go – and it’s the biggest 90 minutes of the summer – but the European Championship has so far belonged to Sterling.

Just one more victory – over Italy in Sunday’s final – and the Manchester City forward will be the leading contender for the player of the tournament award after an unforgettable run of games.

From breaking the stalemate in a tight opening group game against Croatia, to forcing Denmark goalkeeper Kasper Schmeichel into a 119th-minute save in the semi-finals, the Manchester City forward has added unpredictability to England’s control of their matches.

Harry Kane has brought goals at a crucial part of the tournament, and others in the squad have had their moments, but Sterling has consistently brought the fire to light up England’s performances.

It would be hard not to be inspired by the familiar Wembley surroundings for a man who has the arch tattooed on his arm as a reminder of where he has come from.

Passing by friends’ homes and landmarks from his childhood on the coach journey to the stadium must surely act as a source of motivation.

"I've always said if I play at Wembley in a major tournament, in my back garden, I'm scoring," he said after his strike in the 1-0 over Croatia.

But there’s been so much more to Sterling’s performances at Euro 2020 than merely passion and he has played a huge role in City’s recent years of unprecedented success.

There is no doubting his determination and willingness to succeed, qualities which can be seen right the way through his career – from his early days in west London, playing for QPR, to moving up to Liverpool as a 15-year-old and then switching to City in search of success.

It’s his intelligence and assuredness, however, that have made him one of the most dependable members of Southgate’s squad.

Against Denmark – England’s first semi-final victory in five attempts over five decades – Sterling was involved in almost all of their best attacking moments; cutting inside and firing a low shot at Schmeichel early on, twice matching Bukayo Saka’s line-breaking runs when England fell behind, forcing Simon Kjaer into an own goal, winning a controversial penalty and then almost adding a third in extra-time with the Danes tiring.

Of the 24 matches he has played for Southgate since the 2018 World Cup, Sterling has been involved in 26 goals, scoring 15 and assisting another 11.

He is getting better with experience too; this tournament is his fourth but, perhaps surprisingly, the first in which he has scored.

And as a senior figure in the dressing room, the 26-year-old is prepared to take on responsibility both on and off the pitch.

Southgate’s young squad has a togetherness that hasn’t always been evident in England teams through previous tournaments and Sterling is among those that should take credit for helping to foster that unity.

When they came under criticism for taking the knee against racism, even from members of the United Kingdom’s government, they banded together with Southgate explaining their reasoning in a considered manner.

Sterling, like others in the dressing room, has suffered prejudice and racism throughout his career, with social media in particular becoming a serious problem.

With other inspirational figures, such as Jordan Henderson and Marcus Rashford, England have led the fight against discrimination and given the country something to be proud about after the tough times following the Covid-19 outbreak.

For a squad so young, they have a wisdom and calmness to deal with difficult situations, although Sterling was still slightly taken aback when he was bluntly asked if he had justified his place after scoring the opener against Croatia.

“Have I justified my selection? I'm trying [to do so],” he replied magnanimously when put on the spot.

To be fair to the questioner, Sterling hadn’t finished the club season in his best form despite helping City to a third Premier League title in four years and starting a Champions League final.

After three seasons of scoring more than 20 goals, his statistics took a dip, although 14 in all competitions is still the fourth-best tally of his career.

He also lost his place in Pep Guardiola’s side to England team-mate Phil Foden and his recall for the European final against Chelsea was something of a surprise.

The City boss has been one of Sterling’s biggest supporters, calling him to personally assure his belief in him shortly after taking over at the club and as he was facing criticism for England’s disastrous Euro 2016 elimination.

Guardiola challenged him to become one of the best players in the world and Sterling has never stopped listening and trying to improve, whether it's receiving advice minutes after winning the 2019 FA Cup despite scoring twice, taking criticism after scoring a hat-trick or being challenged to prove Guardiola wrong for dropping him for big matches at the end of the season.

The response has always been emphatic. His future at City will be looked at when the Euros are over, with his contract ticking into the final two years and the likelihood of talks over a new deal to come.

First, he has the considerable task in front of him of ending England’s 55 years of hurt to put the final touch to the summer of Sterling.