Euro 2020 Team Of The Tournament: Italy Dominate As Ronaldo & Pogba Miss Out

Euro 2020 Team Of The Tournament: Italy Dominate As Ronaldo & Pogba Miss Out 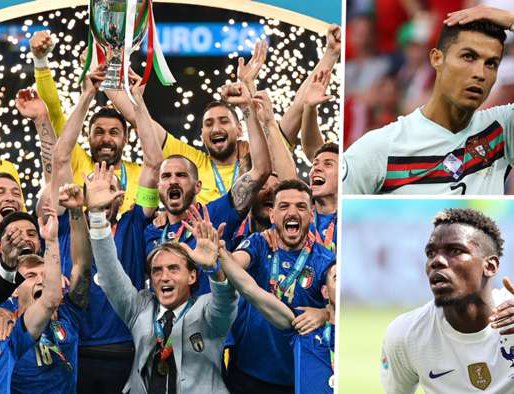 It's been an absolutely sensational summer of football, culminating in Italy's dramatic defeat of England, but who were the best players on show?

The imminent arrival of Gigi Donnarumma on a free transfer already looked like a sensational bit of business by Paris Saint-Germain – now it is looking like one of the best deals in history.

The 22-year-old was utterly immense as Italy won Euro 2020 in dramatic fashion, with their giant of a goalkeeper saving two penalties in the final, including the decisive spot-kick from Bukayo Saka.

The Arsenal teenager deserves the utmost sympathy for his miss because there is no more intimidating shot-stopper in the world right now, as underlined by the fact that Donnarumma is five for five in terms of shootouts, for club and country.

Atalanta have done it again: the masters of the transfer market have unearthed another gem.

Just over six months after signing Joakim Maehle from Genk for just €10 million (£8.5m/$11.9m), the versatile wing-back is now arguably worth three times that amount thanks to his sensational displays for surprise semi-finalists Denmark.

Despite being right-footed, Maehle proved a phenomenon on the left flank, scoring two goals and creating another.

Indeed, the 24-year-old produced the most outrageous assist of the tournament by finding Kasper Dolberg in the area with a stunning outside-of-the-boot cross in the quarter-final win over Czech Republic.

What was truly incredible about Leonardo Bonucci's Man of the Match-winning performance in the final was just how ridiculously easy it made it all look.

He was calmness personified. On two separate occasions, he nonchalantly flicked headers back to Donnarumma, even though Raheem Sterling was close by, looking to pounce on any mistake.

Bonucci, though, turned in a flawless, outrageously composed display.

His passing, as always, was sensational, while he was also on hand to score the crucial equaliser when Marco Verratti's header came back off the post.

Bonucci has sometimes been accused of playing as more of a midfielder than a defender. At Euro 2020, he proved himself one of the most complete centre-backs of the modern era.

How on earth could we pick anyone other than Giorgio Chiellini to play alongside Bonucci in the heart of our defence?

Italy's greatest warrior won what is likely to be his final battle in the international arena with the kind of spirited showing that made a mockery of his 36 years.

Harry Kane dropped deep to great effect in the first half, but Chiellini did not afford the England striker a single chance in the area.

And on the one occasion that Saka got away from him, the Juventus man ruthlessly hauled the Arsenal teenager to the floor, creating an image that quickly went viral. Chiellini simply was not going to be denied his crowning moment of glory.

There was no worthier recipient of the Henri Delaunay trophy than the Azzurri's inspirational captain, whose status as one of the game's all-time greats is now complete.

Losing Leonardo Spinazzola was a major setback for Italy, but it represented an even bigger blow for a player that has been plagued by injuries throughout his career.

It had felt as if the 28-year-old's moment had finally arrived when he turned in a Man of the Match-winning performance against Turkey in the tournament-opener in Rome, and the marauding left-back was again named the best player on the pitch again when the Azzurri edged past Austria in the last 16.

It came as no surprise, then, that Roberto Mancini's side suddenly looked a lot less menacing going forward, and much more vulnerable in defence, when he was stretchered off in the closing stages of the quarter-final win over Belgium.

So, it was beautiful to see Spinazzola make it to Wembley to receive his winners' medal, and the hope now is that he makes a rapid return from his Achilles surgery so that he gets his chance to shine again at next year's World Cup.

Arguably the outstanding midfielder on show at this summer's Euros, Pierre-Emile Hojbjerg was the driving force behind Denmark's sensational run to the semi-finals.

The Tottenham man's numbers are just outstanding, perfectly illustrating the fact that he helped his nation in every possible way following the shocking loss of star playmaker Christian Eriksen to a heart problem during the group stage.

As well as racking up three assists, Hojbjerg created 11 chances in total, completed 10 dribbles and won the ball back 51 times – more than any other player in the tournament.

Just over six weeks after lifting the Champions League with Chelsea, the Brazil-born midfielder tasted Euro 2020 glory with Italy, making this a summer of a vindication for the unfairly maligned 29-year-old.

Indeed, Jorginho's quality has even been questioned by his own club's supporters, but there can no longer be any doubts over his greatness.

The former Napoli man was the key man in Italy's engine room, dictating the play with his precision passing and incessant pressing.

The stats speak for themselves: He ranked second for both successful passes (485) and possession won (48), while he set a new European Championship record for interceptions, with 25. No other player made more than 14...

How good was Pedri at Euro 2020? Well, it is fair to say that those comparisons to Andres Iniesta no longer look quite so premature.

In a team that reached the last four, and would have made the final were it not for wayward finishing, Pedri was the top performer.

Before the tournament began, there was some doubt over whether the Barcelona teenager would start.

By the end of Spain's campaign, the midfielder, who created 11 chances and completed more successful passes in the opposition half (317) than any other player, was utterly indispensable, as underlined by the fact that he played all but one minute of his country's six games.

Coach Luis Enrique enthused after Pedri's ridiculously composed display against Italy in the semi-finals, "I've never seen anything like that [from an 18-year-old]. Not even from Iniesta. It's impossible to explain."

And it was. Pedri is truly something else.