Since the onset of monsoon, more than 70 people have already lost their lives while property and infrastructure worth millions of rupees have been washed away in floods and landslides 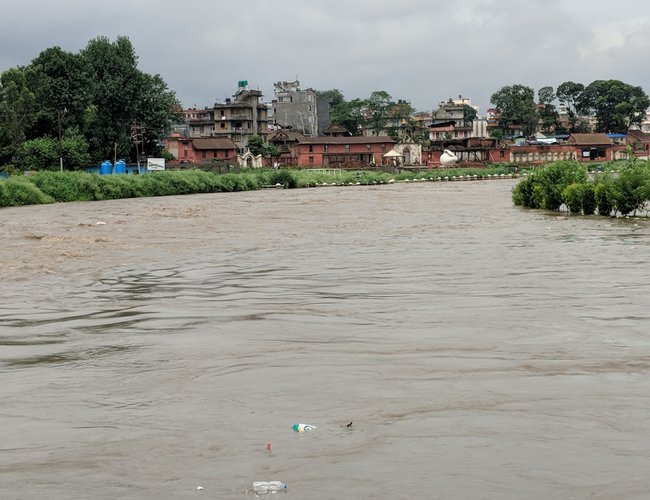 Dragged in the internal party politics, Prime Minister K.P. Sharma Oli did not find any time to inspect the flood-affected people of Melamchi and Helambu areas until quite late. Only after two high level committees constituted by PM Oli and his rival Madhav Kumar Nepal came closer to an agreement, he took Nepal Army’s helicopter to visit flood affected areas on Saturday, July 10.

As all his predecessors would do, PM Oli directed officials to provide immediate relief and expressed his commitment to help victims in the process of rehabilitation, providing them financial packages.

The Prime Minister reached Ganesh Bagar of Helabmu Village Municipality-2 in a Nepal Army helicopter, inspected the flood-hit areas and met the flood victims there.

He said that the temporary shelters of the locals displaced by the floods would be rebuilt immediately.

"The government will provide Rs 50,000 for temporary housing and Rs 500,000 for permanent housing for the flood victims," ​​the PM said, urging the government not to delay formulating a systematic policy to rebuild their shelters. He informed that a technical team had arrived in Helambu along with him to construct the bridges immediately.

On the occasion, Prime Minister Oli went to the Melamchi Drinking Water Source Area in Helambu and the flood-affected areas.

It has been like an annual ritual for the head of the government and the home minister to visit and inspect the flood and landslide affected areas. All of them would return with huge promises but nothing actually materialized for the victims.

Political leaders hardly ever think why incidents of flood and landslides have been intensifying over the years causing bigger loss and damage. Instead of preparedness for floods and protection of life and property, Nepal’s disaster management follows the traditional process of rescue, relief and rehabilitation.

As climate change has started to trigger extreme weathers, Nepal will have to face many severe disasters in the coming days. According to experts, Nepal needs to change the settlement patterns and development works, particularly road construction.

Most of the roads have been passing from river belts and settlements are shifting to lower river belts. Similarly, rampant construction of rural roads in remote areas needs to be suspended for the time being.

However, making any change in the perception regarding development seems impossible. National Disaster Risk Reduction and Management Authority (NDRRMA) said that the total deaths caused by the monsoon-induced disaster had reached 51, with 35 injuries and 60 missing, as of July 8.

Similarly, 548 infrastructures have been completely damaged and 148 partially from June 14 to date.

In the 24 hours before the high level visit to Helambu, floods and landslides triggered by torrential rainfall across the country killed seven persons, leaving nearly a dozen injured and half a dozen others missing. Some 17 houses collapsed, 67 families were displaced in Tanahun.

Sixty-seven families had been displaced in Bandipur Rural Municipality of Tanahu district due to landslide triggered by incessant rains.

Out of the 67 houses at risk, 17 houses were completely destroyed and 15 houses were partially destroyed, said Karuna Gurung, vice-chairman of the Rural Municipality. She said that the entire settlement of Khahare area has been displaced. Similarly, in Ramkot of the district, four houses have collapsed and three houses have been partially damaged. Also, 12 families have been displaced in Dharapani of Ward No. 2.

Of those killed in the 24 hours, three were in Darchula, two in Palpa and one each in Tanahun and Dang districts.

The water flow in Saptakoshi and its tributaries Sunkoshi, Bhotekoshi, Tamakoshi, Dudhkoshi, Arun, Tamor and other rivers is expected to increase and some of them will reach near alert level while the flow in the Tinau, Kankai, Kamala, Bagmati and their tributaries will increase significantly, according to experts.

Similarly, the water flow in the Narayani and its tributaries, especially Budhigandaki, Trishuli, Marsyangdi and Kaligandaki, has increased significantly and some of them had reached alarming levels already.

With further activation of monsoon phenomena, several regions have been continuously receiving heavy rainfall, according to senior divisional hydrologist Bikram Zoowa at the Department of Hydrology and Meteorology (DHM).

According to Meteorological Forecasting Division under the DHM, the present monsoon trough will remain active for a few days in many parts of the country including Provinces 1, 2, Bagmati, and Lumbini.

Meanwhile, Nepal Army has launched rescue and relief operations to save people from landslide and floods.

Following the torrential rains, landslides and flood affected different parts of Nepal blocking roads, washing out bridges, burying people and houses. Nepal Army has mobilized its forces on its rescue and relief mission across the country to save the life and property of people and open the connectivity.

Nepal Army rescued flood affected people in various wards of Madi Municipality. Dozens of houses have already been inundated in the ward 1 due to the flood. Similarly, Nepal Army helped open a portion of Tribhuwan Rajpath in Bhainse which is disturbed by the land slide. 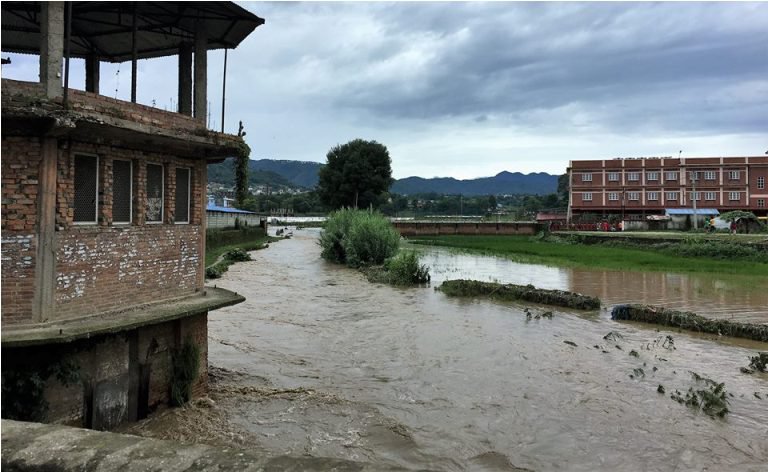 Nepal Army also supported landslide victims in Sundarpur Municipality of Lamjung district bringing the people from there to a safer area. In Parbat district, Nepal Army supported the search and rescue mission to find the people missing in landslides.

According to a press release issued by Public Relations and Information Directorate at Nepal Army Headquarter, Nepal Army is also involved in a search, rescue and relief mission in flood and landslide affected areas of Panchthhar, Tanahu, Gulmi, Palpa and Pyuthan districts.

Kathmandu Jolted By 4.7 Magnitude Earthquake By Agencies 2 weeks, 1 day ago