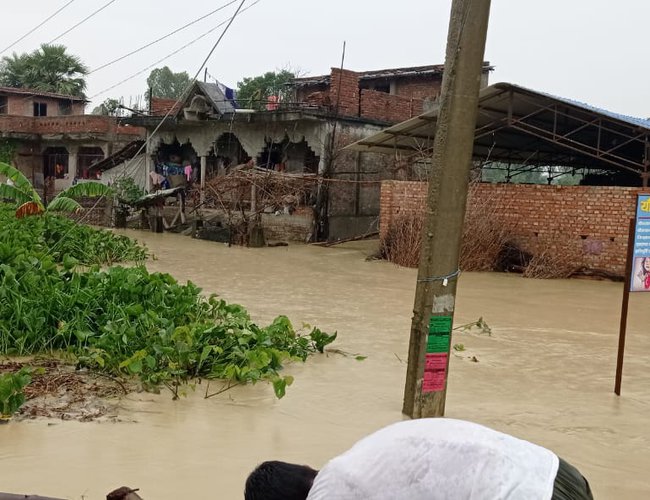 As the incessant rainfall continue for few more days, Department of Hydrology and Meteorology has issued a flood warning urging people leaving in Southern plain to remain alert from possible floods and water inundations.

Due to heavy rain since Thursday, many places of southern part of the Dhanusha district and Nawlpararsi have been inundated.

According to The Rising Nepal, many places in Aurahi Municipality and some places in Janakpurdham Sub-metropolitan City have been submerged.

Deuri and Parwaha area of ward no. 1, Paudesor of ward no. 2 of Aurahi municipality, and Osara and Bhoil villages of wards no. 17 and 18 of Janakpurdham Sub-metropolitan City have been deluged due to incessant rainfall, according to a local, Amanraj Yadav.

Bandhu Prasad Bastola, an officer at the district administration office, Dhanusha, said that no human casualties were reported yet although there have been inundation and that security forces were deployed for rescue operations and taking stock of the situationA section of the East-West Highway in Western Nawalparasi has been obstructed due to incessant rainfall for the last two days.

Similarly, the daily reports that the highway has been disrupted as the road diversion made for building bridges as part of the expansion of the road area has been swept away by flooded streams at multiple places such as Sunawal, Bardaghat, Bhumahi and Khaireni, according to Krishna Bahadur Dhital, a police inspector and chief of Area Police Office in Sunawal.

Due to the flood in nearby river, Sunawal bazaar has been inundated and local mobility has also been obstructed, according to the Nawalparasi traffic police office.