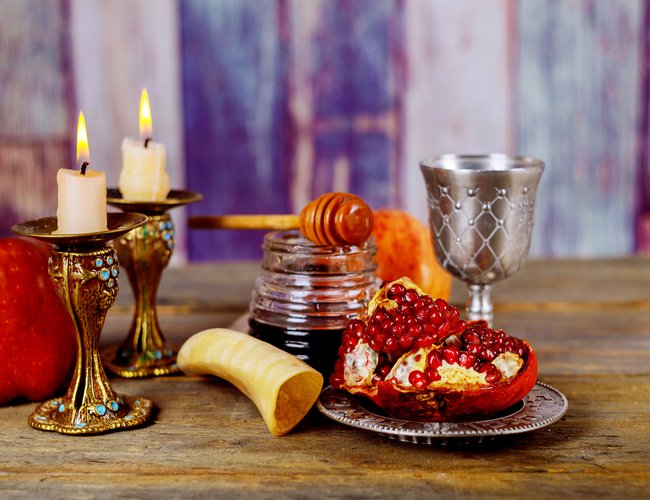 Rosh Hashanah is the beginning of the year according to the traditional Jewish calendar. In 2021, Rosh Hashanah begins at sunset on Monday, September 6. Learn more about how Rosh Hashanah is celebrated with traditions and sweet symbolic foods—and listen to the sound of the shofar!

WHAT IS ROSH HASHANAH?

Rosh Hashanah, literally “Head of the Year” in Hebrew, is the beginning of the Jewish new year. It is the first of the High Holidays or “Days of Awe,” ending 10 days later with Yom Kippur.

This two-day festival marks the anniversary of human’s creation—and the special relationship between humans and God, the creator.

Rosh Hashanah begins with the sounding of the shofar, an instrument made of a ram’s horn, proclaiming God as King of the Universe, just as a trumpet would be sounded at a king’s coronation. In fact, Rosh Hashanah is described in the Torah as Yom Teru’ah, a day of sounding (the Shofar).

The sound of the shofar is also a call to repentance—to wake up and re-examine our commitment to God and to correct our ways. Thus begins the “Ten Days of Repentance” which ends with Yom Kippur, the “Day of Atonement.”

When Is Rosh Hashanah?

Rosh Hashanah is not mentioned in the Torah, Judaism’s founding religious text, and appears under different names in the Bible. Though the holiday was likely well established by the sixth century B.C., the phrase “Rosh Hashanah” shows up for the first time in the Mishna, a Jewish code of law compiled in 200 A.D.

The Hebrew calendar begins with the month of Nisan, but Rosh Hashanah occurs at the start of Tishrei, when God is said to have created the world. For this reason, Rosh Hashanah can be seen as the birthday of the world rather than New Year’s in the secular sense; still, it is on Rosh Hashanah that the number of the civil year increases. The Mishna described three other “new years” in the Jewish calendar in addition to Rosh Hashanah. Nisan 1 was used to resume the cycle of months and measure the duration of kings’ reigns. Elul 1 resembled the start of the modern fiscal year and determined the tithing of animals for charity or sacrifice. Shevat 15 calculated the age of fruit-bearing trees and is now celebrated as the minor holiday of Tu B’Shevat.

According to tradition, God judges all creatures during the 10 Days of Awe between Rosh Hashanah and Yom Kippur, deciding whether they will live or die in the coming year. Jewish law teaches that God inscribes the names of the righteous in the “book of life” and condemns the wicked to death on Rosh Hashanah; people who fall between the two categories have until Yom Kippur to perform “teshuvah,” or repentance. As a result, observant Jews consider Rosh Hashanah and the days surrounding it a time for prayer, good deeds, reflecting on past mistakes and making amends with others.

Unlike modern New Year’s celebrations, which are often raucous parties, Rosh Hashanah is a subdued and contemplative holiday. Because Jewish texts differ on the festival’s length, Rosh Hashanah is observed for a single day by some denominations and for two days by others. Work is prohibited, and religious Jews spend much of the holiday attending synagogue. Because the High Holy Day prayer services include distinct liturgical texts, songs and customs, rabbis and their congregations read from a special prayer book known as the machzor during both Rosh Hashanah and Yom Kippur.

The sounding of the shofar—a trumpet made from a ram’s horn—is an essential and emblematic part of both Rosh Hashanah and Yom Kippur. The ancient instrument’s plaintive cry serves as a call to repentance and a reminder to Jews that God is their king. Tradition requires the shofar blower to play four sets of notes on Rosh Hashanah: tekiah, a long blast; shevarim, three short blasts; teruah, nine staccato blasts; and tekiah gedolah, a very long blast. Because of this ritual’s close association with Rosh Hashanah, the holiday is also known as Yom Teruah—the day of the sounding of the shofar.

After religious services are over, many Jews return home for a festive meal steeped in symbolism and tradition. Some choose to wear new or special clothing and to adorn their tables with fine linens and place settings in recognition of Rosh Hashanah’s significance. The meal typically begins with the ceremonial lighting of two candles and features foods that represent positive wishes for the new year.

Customs and Symbols of Rosh Hashanah

Apples and honey: One of the most popular Rosh Hashanah customs involves eating apple slices dipped in honey, sometimes after saying a special prayer. Ancient Jews believed apples had healing properties, and the honey signifies the hope that the new year will be sweet. Rosh Hashanah meals usually include an assortment of sweet treats for the same reason.

Round challah: On Shabbat (the Jewish Sabbath) and other holidays, Jews eat loaves of the traditional braided bread known as challah. On Rosh Hashanah, the challah is often baked in a round shape to symbolize either the cyclical nature of life or the crown of God. Raisins are sometimes added to the dough for a sweet new year.

Tashlich: On Rosh Hashanah, some Jews practice a custom known as tashlich (“casting off”), in which they throw pieces of bread into a flowing body of water while reciting prayers. As the bread, which symbolizes the sins of the past year, is swept away, those who embrace this tradition are spiritually cleansed and renewed.

Two Shilas Left For Ayodhya From Janakpurdham By Agencies 6 days, 6 hours ago