Booster Reduces Risk Of COVID Death By 90% Among People 50+

Booster Reduces Risk Of COVID Death By 90% Among People 50+ 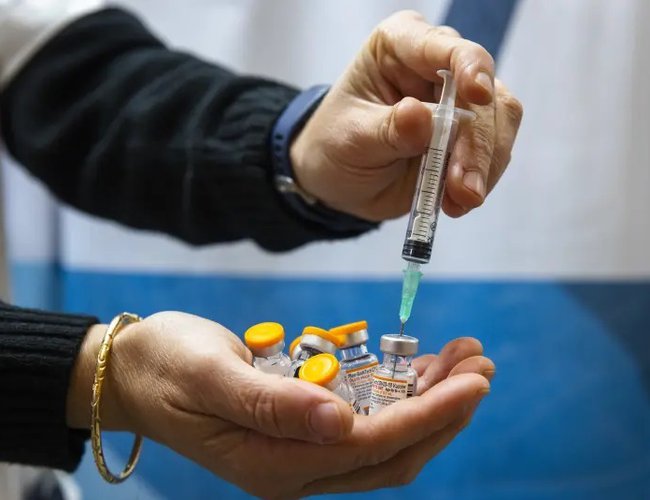 A third shot of the coronavirus vaccine reduces the risk of COVID-19 related mortality by 90%, according to new research conducted in Israel.

The study, conducted by Clalit Health Services in collaboration with Ben-Gurion University of the Negev and Sapir Academic College, was published Wednesday night in the New England Journal of Medicine.

The team analyzed Clalit’s data using advanced statistical methods to help determine the effectiveness of the third Pfizer vaccine dose in preventing mortality in people over the age of 50.

The research is the largest in the world on the matter.

During Israel’s fourth wave, which was dominated by the Delta variant, morbidity was predominantly caused by the vaccine's waning among the population who had already been inoculated at least six months prior. As such, the Health Ministry – at the urging of Prime Minister Naftali Bennett – decided to administer a third dose to anyone who had received their second dose at least five months before.

This decision was made even before the US Food and Drug Administration, which weeks later approved the third shot only for citizens over the age of 65 and people who were at high risk of catching coronavirus or developing severe disease. Since then, it has recommended a third shot for all adults, and now the country is working hard to close the gaps.

The issue of a third shot is gaining even more momentum worldwide with the discovery of the Omicron variant. On Wednesday, Pfizer announced that three shots of its vaccine are effective against the variant, based on neutralizing antibody studies. However, more research – including real-world data – is needed. Some 4.1 million Israelis have received a booster shot. But there are still around a million eligible citizens who have not. Specifically, Clalit’s study followed all of its clients over the age of 50 who had received a second dose at least five months prior and compared the mortality rates from COVID-19 among those who received the booster and those who did not.

The study was conducted between August 6 and September 29. Boosters were approved for Israel’s older population on July 31.

Some 843,208 Clalit patients aged 50+ who received the second vaccine dose were dynamically divided into two groups based on whether or not they received the third shot. Data was matched for age, gender, socioeconomic status and comorbidities. The average age of participants was 68.5. By the end of the study period, 90% of this population had already received the booster dose.

“These findings… provide important and research-based information for the population in Israel and other countries who are still undecided about administering the third vaccine,” Netzer said.