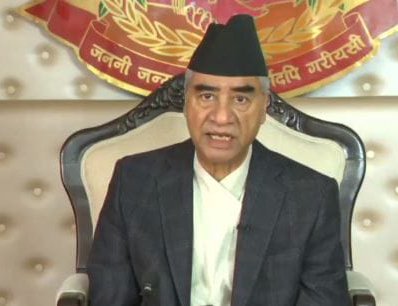 Prime Minister Sher Bahadur Deuba has announced to commence the COVID-19 vaccination campaign to the children between 5 to 11 age group soon reports RSS.

Addressing the nation on Friday, Prime Minister Deuba instructed all the bodies to be prepared for the three-tier elections.

Prime Minister Deuba was addressing the nation for the first time, six months after he was elected the head of the government. More than 1.8 million adults between the 12 to 17 age group received first dose and the drive to administer booster dose to those fighting against the virus on the frontline was on, said the PM in his address to the nation on Friday. Similarly, people above 60 years of age would be administered booster dose within this month.

The policy to provide concessional loans, tax exemption and other facilities to the industries producing COVID-19 vaccines and liquid oxygen has been implemented, he reminded.

There had been extensive reforms in infrastructural development in government hospitals dealing with the virus and their upgrading has continued.

Efforts to prevent and control Omicron variant has been made much effective and there is smooth oxygen supply with adequate stock, PM Deuba said. RSS