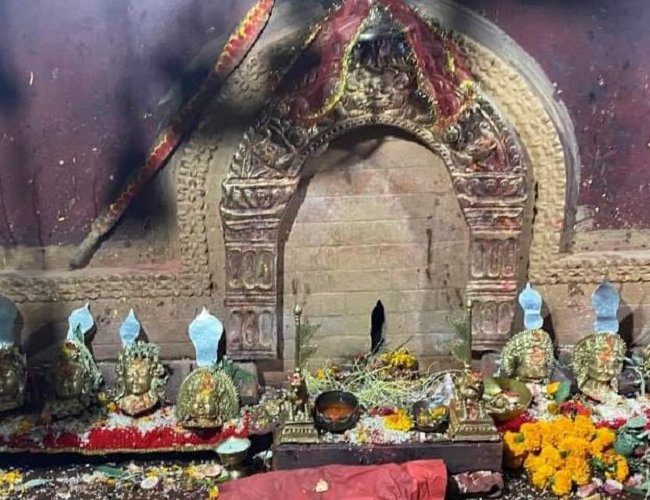 The statue inside the Balkumari Temple at Sunakothi of Lalitpur Metropolitan City-27 has been stolen. The statue dating back to the Lichchhavi period was found missing this morning.

Minister for Energy, Water Resources and Irrigation Pampha Bhusal, Province Assembly member Rajkaji Maharjan, Lalitpur Chief District Officer Ghanashyam Upadhyay and a police team has inspected the site immediately after getting information about the theft from the locals.

CDO Upadhyay said it is presumed the statue might have been stolen between 3 to 4 am today. According to him, the statue has been lifted by cutting nine padlocks and breaking four gates.

Minister Bhusal has instructed the administration to promptly look for the stolen statue and take action against the culprits, saying the case of a 500 to 600 years old Lichchhavi-era statue being stolen is very regrettable.

"I condemn this despicable act and I have instructed the administration to find out the culprits and search for the statue. I believe this historical and archaeological statue will be found soon," she said.

Police said they have prepared the report on the situation of the incident site and have intensified the search. RSS

One Died And Scores Of Building Damage In The Bajura Earthquake By Agencies 3 days, 5 hours ago