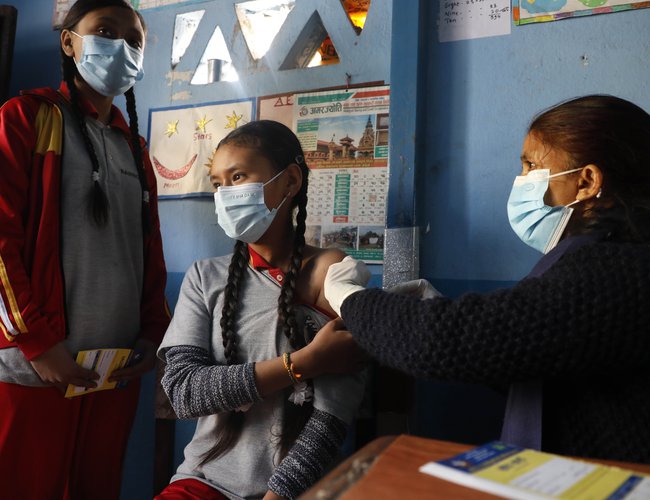 Minister for Health and Population Birodh Khatiwada said that the target of vaccinating the eligible population against COVID-19 would be completed by mid-May.

Speaking at an official programme organised to make public the achievements of the first 100 days after he assumed the office, Minister Khatiwada said that the vaccination campaign was being conducted every day across the country.

The programme was, however, conducted on the 125th day of Khatiwada taking charge of the Ministry for Health and Population (MoHP).

“We had planned to complete the vaccination campaign by mid-April earlier for those aged above 18 years. Since the vaccines for adolescents aged 12-17 years also became available from December, 2021, the targeted deadline has been extended by a month,” said Khatiwada.

Regarding the children aged 12-17 years, which covers a population of 3,405,455, 84 per cent have been vaccinated with the first dose and 38 per cent with the second.

“After administering the first and second dose, we must continue with the booster doses. Booster dose has been prioritised for senior citizens, patients with long-term disease and front liners for now but will be made available for all after February 13,” said Khatiwada.

He also added that the government has planned to vaccinate those aged 5-11 years as well. “We are coordinating with concerned authorities to procure the vaccines for these children. It has been assured to arrive soon,” said Khatiwada.

Since concerns have been raised over disappearance of vaccines, Minister Khatiwada said that they had formed a committee to investigate into the issue.