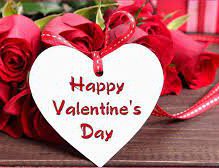 Valentine’s Day is celebrated on February 14, and we are ready to shower our significant others with love and tokens of our affection. Unlike National Boyfriend Day, this day isn’t just for the boyfriends — anyone and everyone can be shown some love today. This day of love is celebrated in so many ways, it is always exciting to see what new traditions are included or created year after year. Whether it is elaborate engagements, intimate dinners for two, spending time with family, or the most recent variation ‘Galentine’s Day’. It is a holiday we all can enjoy!

Love is in the air on Valentine’s Day on February 14. Even though we believe that love should be spread and celebrated every day, we don’t always remember to do that. So on this dedicated day, go above and beyond in expressing your love for family, friends, and of course, your significant other.

The believed origins is that it came from the feast for the patron saints named Valentine, by the Catholic Church during the in 496 AD. This was a way to over shadow and later replace the deemed brutal Pagan festival of Lupercalia. This festival was celebrated at the beginning of spring and paid homage to the Roman God of Agriculture, Faunus, on February 15. A goat and dog would be sacrificed symbolizing fertility and purity, respectively. This would then involve the hide of the goat being torn into strips, dipped in the sacrificial blood, and painted across the women and crops.

Despite there being many Valentines associated with the patron saints day, historians believe that the romanticized element of how Valentine’s Day is celebrated today came from a priest who was martyred by emperor Claudis II Gothicus in around 270 CE. Varying stories talk about different St Valentines with some saying one was marrying couples in secret to prevent men going off to war, another healed the blind, and the next wrote a message to his daughter signed ‘your Valentine’. There is also a possibility that they could be the same person!

It was during the 1400s that the day was associated with romance. Messages, or ‘Valentines’ as they were called, began to appear. Hand written letters and poems declaring affections of love became more and more popular. In the mid-1800s, Valentine’s cards began to be commercially produced and traditional gifts were candy and flowers, especially red roses symbolizing love and beauty.

Today, Valentine’s Day has become inclusive of friends and family to show how much you care and love them. Companies have seized the opportunity to fit their products and services into the Valentine’s Day period to benefit from the sales boost, as it continues to grow each year.