Gautam Buddha International Airport To Operate From May 16

Gautam Buddha International Airport To Operate From May 16 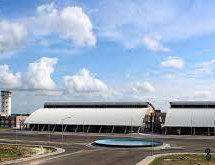 Following the completion of calibration flight, which started on February 18, Gautam Buddha International Airport is now ready to operate flights from May 16.

However, the work of setting up an immigration office under Home Ministry and customs office under Finance Ministry has not been done yet reports The Rising Nepal.

Flight calibration is done to check the navigation system and ensure radar systems are working to ensure an aircraft passes an inspection and its equipment is up to date.

The preliminary report of the mechanical flight shows that the communication and other equipment installed at the airport have been found to be in order.

The construction of the airport has been done under two phases, including ICP-I (construction of physical infrastructure) and ICP-II (communication equipment installation).

Aero Thai Company, which was awarded the contract for ICP-II of the airport, carried out the calibration flights reports The Rising Nepal.

Supporting Nepal Is A Priority For The US: USAID Administrator Samantha Power By Agencies 2 hours, 25 minutes ago