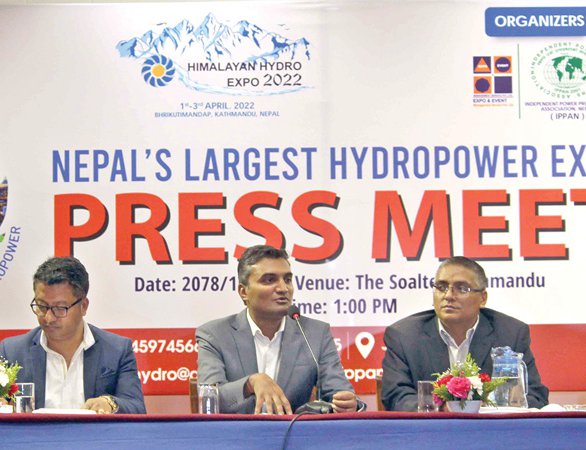 The Independent Power Producers' Association of Nepal (IPPAN) and Expo and Investment Management Services are jointly organizing the three-day expo to promote hydropower in Nepal.

“The expo is being organized with the objective of informing about the latest technologies of international standards used in developing hydropower, gathering the stakeholders of hydro under one roof and discussing hydro development with different countries,” said IPPAN President Krishna Prasad Acharya.

Organizing a press meet on Wednesday, the organizers said the expo would be organized in coordination with the Indian Embassy in Nepal while the British Embassy and the Canadian High Commission in Kathmandu are country partners.

The organizers expect the Himalayan Hydro Expo 2022 will give a different dimension to the energy sector with the objective of accelerating the current state of energy production along with unique activities in the hydropower and energy sectors in Nepal and supporting the government's target of generating 15,000 MW of electricity in 10 years.

There will be more than 100 stalls at the three-day expo. Hydropower promoters, producers, equipment suppliers, turbine producers, investors, banks, insurance and various stalls related to new technologies and construction in hydropower will showcase their products and technologies in the expo.

According to the organizers, about 50 percent of them will be foreign stalls. A rally of electric vehicles would be organized from Kathmandu to Pharping, where the first hydropower plant in the country developed in 1911 during the Rana regime.

Ashish Garg, Vice President of IPPAN, said that the rally of electric vehicles will not only be a special attraction of the expo but will also play an important role in the marketing of the electric vehicles and expanding the internal market of hydropower reports The Rising Nepal.