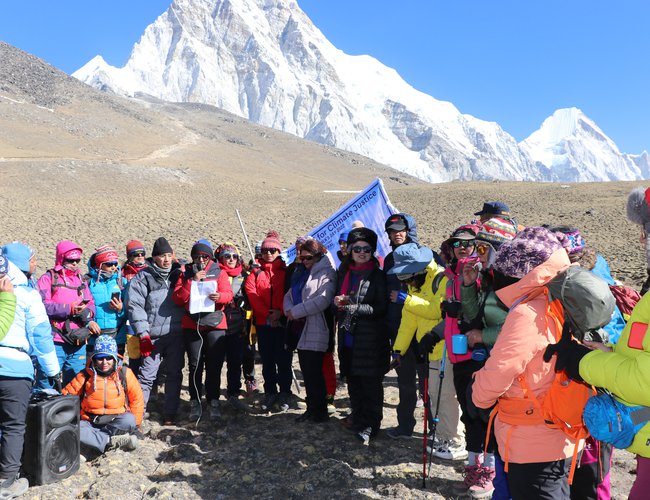 A mission to Kalapathtar, a campaign for climate justice, concluded at Kalapaththar today with a 10-point declaration.

A team comprising 40 women from different walks of life took on a 13-day trek beginning from Kathmandu to gather at Kalpaththar at an elevation of 5545 meters in the Mt Everest region, for a special programme on the occasion of the International Women’s Day ( IWD) 2022.

The walk organised by “SaathSaathai”, a civil society organisation aimed at advocating for climate change and drawing wider concern for its impacts, especially on the lives of women. It was supported by the Minister for Forest and Environment and other several local organisations.

The declaration calls for the best efforts to define the role of women in the climate change mitigation and adaptation efforts and for sustainable management of the human health system. The meet agreed to seek support and cooperation from the international community to make women of the mountain range capable of meeting challenges of climate change, drawing global concern in regard to climate change impact in the mountain and low-lying areas and the protection of the Mountain ecosystem largely vulnerable to climate change effects.

The meet was held on the theme of ‘Women United for Climate Change Justice.”

The participants of the programme were univocal that none will be left unaffected by the problems from climate change and countries like Nepal with vulnerable geography would disproportionately suffer from its consequences and there was a need to prod the world forum to mitigate the impact and cope with consequences.

Supreme Court Justice Sapana Pradhan Malla, one of the participants of the programme, said that the time has come for a country like Nepal to strongly raise its voice in the world forum for climate justice and fight a legal battle to this effect. She also stressed the need for coming up with legal means for the implementation of the international conventions and treaties concerning Nepal.

Stating that women have been affected the most by climate change, senior actress Manisha Koirala stressed the need for women to come together in resolving the problem.

Member of the UN Convention on the Elimination of All Forms of Discrimination against Women (CEDAW) Committee, Bandana Rana underscored the need for the entire world to unite for ending various disasters faced by our generations due to the impact of climate change reports RSS.