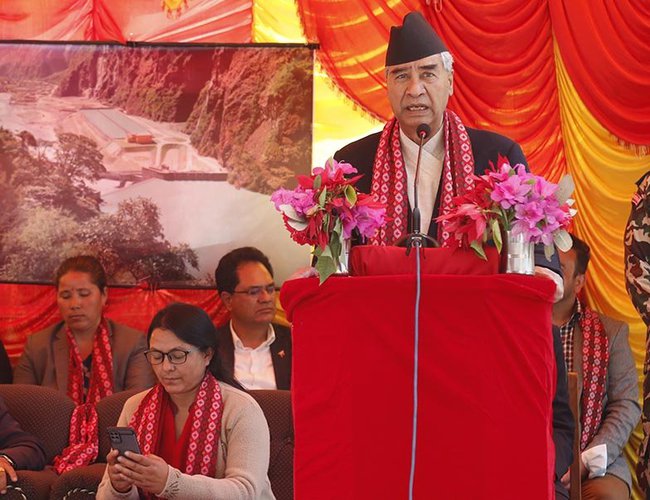 Prime Minister Sher Bahadur Deuba said that the government would work for the development of large reservoir projects reports RSS.

Addressing the inauguration ceremony of the 220-132 KV new Khimti substation completed under the Upper Tamakoshi Hydropower Project at Gogar in Dolakha earlier today, he said that the Budhigandaki and West Seti reservoir projects will be moved forward.

The Budhigandaki is a 1,200 MW-capacity hydropower project while West Seti Hydropower Project is with a capacity of 750 MW.

The Prime Minister said that these projects were important for energy security. He also said that large and reservoir projects were also necessary for clean and green energy and the government was doing its homework for the same.

On a different note, the Prime Minister also clarified that appropriate decisions would be taken regarding the Power Purchase Agreement (PPA) which has not been able to move forward for a long time. The energy entrepreneurs have been saying that the construction of the project has been disrupted due to the failure of PPA.

On the occasion, Prime Minister Deuba said that the Upper Tamakoshi Hydropower Project, built with Nepal's own investment and hard work, has made a great contribution to the supply of electricity and thanked all the concerned employees and construction businessmen.

Upper Tamakoshi, a project of national pride, has so far generated one billion units of electricity. The project with a total capacity of 456 MW was inaugurated last June. The Prime Minister thanked all those who helped in the project and urged them to use their knowledge and skills in other projects as well.

Also addressing the program, Minister for Energy, Water Resources and Irrigation Pampha Bhusal stressed the need to develop reservoir projects for energy security. She said that the government was doing homework for the development of the reservoir project and the results would be achieved soon.

Minister Bhusal shared that preparations are being made to build large reservoir projects in all the provinces except Madhes. Special attention should be paid to the development of Nepal's energy sector to reduce the trade deficit and the government was committed to that.

Energy Secretary Devendra Karki said that the government was ready to address any grievances of the locals affected by the hydropower project.

On the occasion, Nepal Electricity Authority (NEA) Executive Director Kulman Ghising said that the NEA is preparing to move ahead with big projects with the investment of the people. He termed the Upper Tamakoshi Hydropower Project as a "game-changer project" and said that it has also made a significant contribution in improving the economic condition of the NEA. reports RSS.

US Under Secretary Nuland Arrived In Kathmandu By NEW SPOTLIGHT ONLINE 3 hours, 50 minutes ago

Nepal Has Huge Potential As A Producer Of Green Energy: British Ambassador Pollitt By NEW SPOTLIGHT ONLINE 15 hours, 47 minutes ago