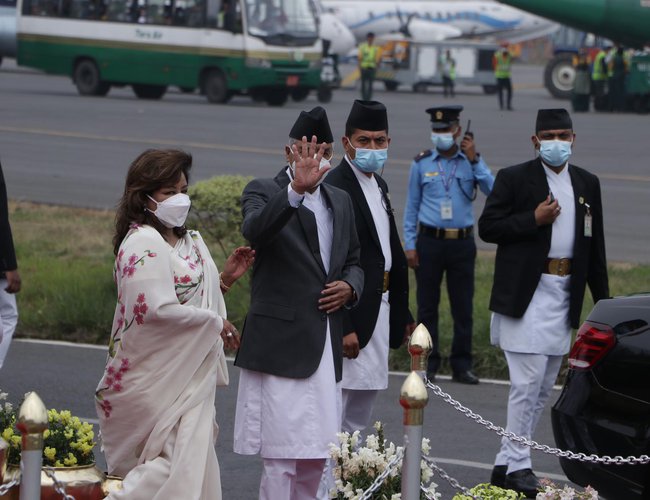 Nepal's Prime Minister SherBahadurDeuba is visiting India from April 1 to 3 on the sidelines of Chinese Foreign Minister Wang Yi's recent visit to New Delhi and Nepal. This is his first official visit to India since being appointed last July and this visit was at the invitation of Indian Prime Minister Modi. However, he has already visited India four times as the Prime Minister.

The two leaders met on the sidelines of the UN Climate Conference in Glasgow last year.

During Deuba’s visit, cross-border connectivity and healthcare projects built with Indian assistance will be inaugurated. The Prime Ministers of Nepal and India are likely to inaugurate the Kurtha-Jayanagar railway project. The 35-km rail line links Jayanagar in Bihar to Kurtha in Janakpur, Nepal. A study of a railway line from Raxaul, India, to Kathmandu is also underway. It too will be funded by India.

As such, eyeing to widen its engagement in the Himalayan region bordering China, India is hosting Nepalese Prime Minister in what is his maiden foreign trip since his re-election last year.
PM Deuba’s visit to India this time will be the first by a Nepali PM in almost four years. The last visit was by KP Sharma Oli in April 2018, two months after assuming office. Some opine that Nepal-India relations had hit a new low during Oli’s tenure following some of his statements, including on Covid-19 and the Kalapani issue. Since Deuba returned to power, the ties have witnessed improvement.

The Nepali leader was expected to visit India earlier this year to participate in Vibrant Gujarat. However, the program was canceled due to the spread of Covid-19.
His last visit to India was in 2017. Apart from his official program in New Delhi, the Prime Minister of Nepal will also visit Varanasi.
The agenda of the visit is expected to give the two neighbors an opportunity to review the overall dimensions of bilateral relations. It is expected to cover issues of connectivity, economic and development partnership, trade, health sector, energy, people-to-people and mutual benefit.

There is no confirmation that the agreement will be signed. However, after the talks between the two leaders, it is said that two agreements have been reached for strengthening the border.
The railway project has been drying up since February this year due to lack of law for operation of Kurtha-Jayanagar railway line. And the Government of Nepal has re-issued the Railway Ordinance for the operation of cross-border traffic.
There is also a memorandum of understanding to rebuild about 137 health posts with Indian financial assistance. India made the announcement after a powerful earthquake in 2015.

There has been a series of high-level visits from India, including the visit of External Affairs Minister Dr. S. Jayashankar, who came to Nepal in 2019 to attend the fifth meeting of the Nepal-India Joint Commission.

The new map of Nepal includes Lipulek,Kalapani and Limpiyadhura in Nepali territory. India has not accepted this. As it is a trilateral border between the three countries, Nepal has expressed concern in the road constructed by India through Lipulek to Mansarovar in Tibet.
It remains to be seen how Prime Minister Deuba will resolve the strained relations with Nepal through bilateral talks.
Also, three years after the Enlightened People's Group (EPG) prepared its report to suggest a review of the treaty between Nepal and India, the Indian side has been reluctant to understand it. India has been reluctant to understand the report, sometimes using the Prime Minister's busy schedule as an excuse for elections.

It may be recalled that the EPG was formed in 2073 BS to suggest revision of treaties and agreements including Nepal-India 1950 as per the agreement reached at the Prime Minister's level.
During his visit, Deuba will hold bilateral talks with Indian Prime Minister NarendraModi.
Everyone knows that Nepal and India have been close and close friends since time immemorial.

Nepal and India, despite their huge differences in size and population, economy and technology, are united by their culture, traditions and philosophy.

From a changed perspective, Nepal-India relations should be viewed from the perspective of: How to promote traditional relations? How to strengthen bilateral economic relations and how to develop trade on an equal footing.

India has always been our major trading partner. Therefore, for any trade policy to be successful, the Indian market and the mutual interest of both the countries must be taken into consideration.
Nepal's politics with India or India's economic diplomacy with Nepal should be seen where both countries win and neither country loses.
In the meantime, Nepal offers abundant opportunities to exploit natural resources, including fresh fruits and vegetables, herbs, medicinal plants, minerals and agricultural products for export to India. Both countries should seize this opportunity.
The 1996 trade agreement is seen as a cornerstone of bilateral relations. However, many issues and paths can be taken forward by forming a joint committee representing the private sector in Nepal and India. It has had good results in the past and the government has taken ownership of the suggestions.
Apart from manufacturing, hydropower, tourism, Indian investment will also come to Nepal, which has created ample opportunities for mutual benefit of both the countries in the field of education as well.
As there is no port in Nepal and the government has recently set up a "shipping" office to operate the sea, there will be ample opportunities to work collectively. The ship is being navigated and operated in Nepal with the technical assistance of India
While in opposition, there is a constant fear that Nepali political parties will oppose the project linked to India and that it should be rectified while in government. This has exacerbated problems with India, including in many hydropower projects. Such a mindset and attitude must change.
Laboratory testing facilities should be developed on both sides for food items. The Government of India has been requested to assist in the construction of infrastructure with state-of-the-art technology to import Indian vegetables and fruits to Nepal. Similarly, products like Nepali Ginger, Tea, Large Cardamom, should have easy access to India with laboratory testing and excellent quarantine office.
Railway Cargo- Broad gauge railways should be developed for the promotion of tourism and Buddha circuit by extending the border area up to Hetauda.
To review the bilateral transit treaty, the permanent operation process has been finalized to allow the operation of own vessels from Kolkata port to three river ports near the Nepal-India border, including Shahbaganj in Jharkhand, Kalighat in West Bengal and Varanasi. In Uttar Pradesh, land routes have to be used for transporting goods to other destinations.
It is necessary to create a conducive environment to attract foreign investors to Nepal. For that, first of all, political stability, security, infrastructure and friendly policies are needed. The private sector wants to work in a free and fair environment where both governments work to promote and welcome investment - both in India and Nepal. Indian investors should be told that there are ample opportunities to work in Nepal.

This is a good time to invest in big projects in Nepal, especially when we are talking about assisting in the reconstruction of Nepal and running various Acts and One Door System.
Nepal remains open to international trade, providing an investor-friendly environment, and encourages foreign direct investment with the aim of achieving greater integration into the world economy.


There are ample opportunities in the hydropower sector. Indian companies have entered Nepal's hydropower projects. Nepal has the potential to generate 83,000 MW of hydropower in Nepal, which is yet to be fully explored.

There is great potential for construction of east-west railway along the southern length of Nepal as well as construction of north-south highway to facilitate Indo-China trade.
A new chapter in Nepal-India friendship will be added while embarking on the journey of tourism. This is an area that can strengthen the economies of both the countries.

For a country like Nepal, the economic benefits of tourism can be unprecedented. It can make Nepal's reconstruction efforts self-reliant and sustainable.
Apart from tourism, there is potential in many other areas. Nepal's banks, for example, are doing well today. If they are allowed to enter the Indian market and a uniform playing field is provided, they will be excellent in India as well. There is great opportunity for manufacturing industry and agriculture.
Nepal needs a large number of seismic infrastructure - hospitals, roads, buildings, bridges, etc. The hospitality sector also has great potential. The opportunities are endless.