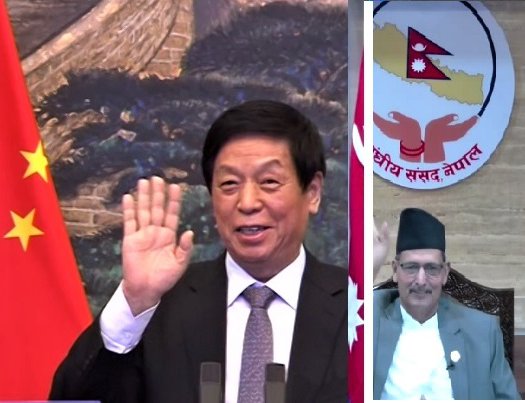 Speaker of House of Representatives Agni Prasad Sapkota held a discussion with Chairman of the Standing Committee of the National People's Congress of the People's Republic of China, Li Zhanshu.

In the discussion held virtually, the heads of the lower houses of the two countries dwelt on parliament, friendly relations, development and other issues related to people's welfare of the two neighboring countries.

Speaker Sapkota appreciated the role played by the Nepal-China Parliamentary Friendships Groups for expanding the bilateral relationship between the two countries and also the way the parliaments of the two countries played a constructive role in the recently held 144th General Assembly of the Inter-Parliamentary Union.

Speaker Sapkota expressed gratitude for China's support in Nepal's development and underscored the need for making it easier to trade through Nepal China border points including Tatopani/Khasa nd Kurang by making them well managed.

During the discussion, NPC Standing Committee Chairman Li highlighted that the exchange of high level visits between the two countries, visits of the Speaker and the members of the parliament to China had further expanded and deepened the age-old friendly bonds between the two neighbors, according to a press statement issued by the secretariat of the Federal Parliament.

Chairman Li said that China firmly respects Nepal's sovereignty, territorial integrity and political independence and that the way China has been able to provide support to Nepal in the fight against the COVID-19 pandemic has widened the people-to-people relationship between the two countries. He said China has supported since long in Nepal's development sectors and shared that the mobility of goods and people through border points such as Khasa and Kerung will be made easier soon.

He said Nepal's federal parliament will leave no stone unturned to further refine and solidify the friendly bonds between Nepal and China reports The Rising Nepal.